GDP in the spotlight

With some humility, we economists ought to acknowledge that we are far better at analysing the past than at predicting the future. So it is in the case of predicting the growth rate of the economy in the next year or later years. Gross domestic product (GDP) and its annual growth rate are usually in the spotlight as a way of assessing the state of our economy. This is despite the fact that some of the world’s leading Nobel Laureate economists have questioned the wide use of GDP as an indicator of well-being, and its growth rate as a measure of progress. Yet, for all the scepticism expressed over GDP and its growth rate as an indicator of how well or how poorly we are doing as a community or society, its popularity and usefulness among economists or the press have hardly waned.
So, it is not surprising that we Bangladeshis – economists and the media alike – should be so much in awe of this one indicator, which we have come to see as the be all and end all of economic progress. To be fair, we have a vibrant print and electronic media – 30 plus TV channels and 50 plus daily newspapers, at last count. These are hungry for news on the economy – and who else but gullible economists to meet their thirst. Therein lies the danger of making too much out of too little or incomplete research.
The GDP growth rate – current and projected – is constantly on the radar screen. At budget time, at end of the calendar year and anywhere in between, we are all eager to know whether the economy is on track to achieve its targeted or potential growth rate. Policy success or failure is judged by whether or not growth targets are met – or not met. In times of crisis, prescient economists are all the more in demand for a quick assessment of where things stand in terms of the growth rate, as if growth alone summed up the national predicament, to the neglect of all other miseries and tribulations caused to lives and livelihoods by adverse events.

It turns out the leading international agencies, such as the World Bank, the International Monetary Fund (IMF) and the Asian Development Bank (ADB), are just as eager to forecast what Bangladesh GDP growth might be in the next year and in years to come. And the local press is quick to seize these forecasts as the vade mecum of growth data – often in front-page headlines – giving these tentative estimates much more sanctity then they deserve. Yes, they are tentative. The margin of error, disingenuously omitted, is high because the forecasts are based on a limited batch of high-frequency provisional data such as exports, imports of industrial machinery and raw materials, seasonal agricultural production in light of climatic developments, preliminary data on industrial production and inference from financial sector developments. The fact of the matter is that computation of GDP, the sum of value added in all economic activities in the country, is a huge statistical undertaking of Bangladesh Bureau of Statistics (BBS), which has an entire wing with numerous staff employed to retrieve data, primary and secondary, which then become inputs into the final estimation of annual GDP and its rate of growth. This massive exercise carried out throughout the year simply cannot be replicated or substituted by an economist or two sitting at their desks in the office of some international agency. What they can do at best is exercise judgement on what they expect GDP growth to be in the coming year(s), stating what the margin of error is likely to be. And the public should be so informed.
Lately, it seems that international agencies that are respected the world over for their quality of research and data are competing, as it were, to forecast lower than official estimates of GDP growth (Table 1). These lower forecasts are actually formulated relative to official statistics of the previous year by making judgement calls based on what are perceived to be the state of the economy in light of certain identifiable adverse developments. Clearly, these presumptive forecasts lack the precision needed for a definitive statement on a macroeconomic aggregate such as GDP or its growth. 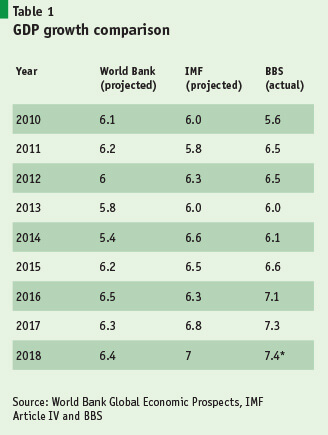 Given that BBS does not compute quarterly or biannual GDP figures, any estimate of GDP and its growth rate made before BBS comes up with its annual GDP figures must be taken with a large grain of salt. Prior estimates, particularly by international agencies, have to be purely judgemental, since they do not have access to the myriads of coefficients and parameters used for GDP computation, which, in Bangladesh, is done exclusively by BBS through various indirect methods, with a margin of error that is considered acceptable in most developing countries (as long as they adhere to the UN System of National Accounts). In the circumstances, anyone coming up with a GDP growth figure estimated down to one decimal point evokes disbelief. True, an agency could make conjectural forecasts of GDP growth using updated information on some key variables. But such a conjectural approach could at best come up with a range of estimates rather than a point estimate.

The fact of the matter is that computation of GDP, the sum of value added in all economic activities in the country, is a huge statistical undertaking of Bangladesh Bureau of Statistics (BBS), which has an entire wing with numerous staff employed to retrieve data, primary and secondary, which then become inputs into the final estimation of annual GDP and its rate of growth.

A question of credibility

Given the fact that estimation of national accounts in our country has to adopt indirect methods to capture all available information on output of goods and services during the year, and the use of value addition coefficients and parameters in various economic activities becomes a necessity, this also presents the scope for tweaking some coefficients embedded in the computations in order to achieve the ‘desired’ growth rate. What is worrisome is that, by tweaking some of these coefficients or parameters, it is possible to easily make a difference of several percentage points in the estimate of the growth rate in any particular year. To elucidate this point, if GDP growth works out to, say, 6% after computations, it is possible to iteratively tweak some of the parameters or coefficients to produce a growth rate of 6.3% without anyone under the sun knowing about it except for the computer operator at BBS. To be fair, such tweaking cannot be repeated too many times without GDP data going off track to become incredulous to all. So let us not expect this happens too often. In the absence of a national statistician who stands high in the warrant of precedence and can be taken as the final arbiter on national statistics, without fear or favour, the incentive remains high for a government agency rather low in the national pecking order to try and conform to desired or ‘politically correct’ statistics, particularly when it is standard practice for BBS to seek approval of its estimates from higher authorities.
For these reasons, one major area of concern for researchers and analysts is the credibility of statistics of national output and its rate of growth. It is also common knowledge and a matter of grave concern that BBS lacks an adequate number of competent professional staff. With its limited staff and resources, it goes to the credit of BBS that it continues to generate a plethora of national statistics from such diverse subjects as infant and maternal mortality rates, to inflation, to an index of industrial production, to national accounts statistics.
We must break new grounds on creating an environment for national statistics to be credible all the way. The long and short of it is that GDP growth estimates have to be robust and stand the test of professional scrutiny at all times.