It all started with a paper posted online; the pebble thrown by a phantom, Satoshi Nakamoto, took a decade to create frenzy in the financial world. The year 2017 was the year of Bitcoin and other crypto currencies, as the price of one Bitcoin soared to more than $10,000, from approximately $4,000, within just a few months. According to Coinbase, as of February 2018 a total of 1,530 crypto currencies hold market capitalisation worth more than $470 billion. Despite being somehow discredited as a means of supporting unscrupulous financial operators, more and more people are still Googling to understand what a crypto currency is. How do they work? Why are they different from other established currencies? When will the Bitcoin bubble burst? What are the implications for the banking system?

Bitcoin was the first decentralised crypto currency, bypassing the banking system. A crypto currency is a digital asset that secures its transactions, controls the creation of additional units and verifies the transfer of assets through cryptography. The idea first came into being on 31 October 2008 through a white paper authored by an unknown person or group of people under the name Satoshi Nakamoto with the title ‘Bitcoin: a peer-to-peer electronic cash system’. The first-ever block of Bitcoins, known as the ‘genesis block’, with a reward of 50 Bitcoins, was mined on 3 January 2009 by Satoshi. The following text was embedded in the Coinbase of the block: ‘The Times 03/Jan/2009 Chancellor on brink of second bailout for banks’ – probably as a satire directed towards the established monetary system. Other crypto currencies came into existence in the digital world based on the open source Bitcoin software.
The first transaction using Bitcoins was made when Satoshi transferred 10 Bitcoins to Hal Finny, a computer programmer, as a reward for downloading the open source Bitcoin software on the day it was released from Source forge.

Crypto currency: How it works

There are three main types of crypto currency: mineable, non-mineable and hybrid. Mineable crypto currencies use a system known as Proof of Work (PoW) (rewarding successful miners with new units after the accomplishment of transactions). These include Bitcoins, Ethereum, etc. Non-mineable crypto currencies use a Proof of Stake (PoS) system (meaning that all the coins for the currency already exist, and they must be purchased instead of being mined). PoS coin-holders can mint new coins depending on their holding amount. This means that the more you have the more you will have. These crypto currencies include Ripple, Cardano, etc. There are also hybrid PoW/PoScoins, such as Peercoin. For all the crypto currencies, transactions are verified by network members (using a Peer-to-Peer mechanism) and recorded in a publicly distributed ledger (a block chain). 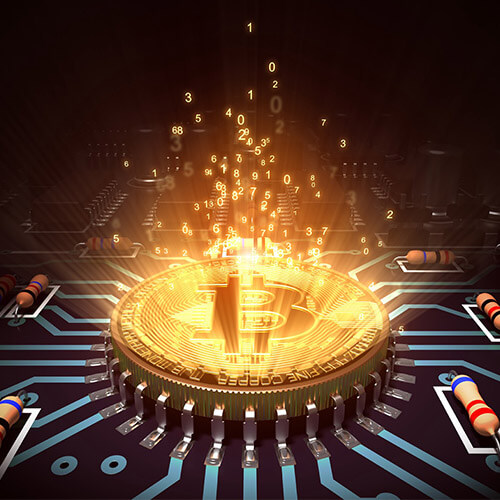 To understand how mineable crypto currencies, work without getting into the mathematical complexities, let us imagine a scenario where there are two persons: A and B. These persons are transacting using Bitcoins. For instance, B is sending A one Bitcoin unit in exchange for an e-book. Instead of names and account numbers, as in the traditional banking system, both A and B have wallets with long identification numbers (IDs). A digital signature is created for this transaction only with two different but connected keys –a private key and a public key.
In this system, records of account balances are not kept. Ownership and availability of funds are verified through checking earlier transactions. This means B must get a total of at least 1 Bitcoin from previous transactions to pay A. As A does not know B, to check B has 1 Bitcoin unspent, A must check all the transactions. The checking is done once when A downloads and installs Bitcoin wallet software in his computer; alternatively, this can also be done by means of an online wallet platform (e.g. Coinbase) if A has his or her account registered there.
The Bitcoin system creates a group called a block to group unconfirmed transactions and links those blocks to the previous blocks to erase the risk of double-spending by B. Transactions in a block are considered to happen at the same time. Any member (commonly known as a miner) in the Bitcoin network can create a block and broadcast it to the whole network as a suggestion for what the next block in the chain should be.
As multiple members can create a block at the same time and broadcast it to the network, a secret mathematical question is added to each block. The answer to the question is randomly guessed. With every member guessing numbers, it takes several minutes to find the solution. If one member obtains the answer, then he or she broadcasts the block in the network and has the block accepted as the next in the chain.
If more than one block is solved at the same time, branches are created. Everybody builds on top of the first one they receive. The tie is broken when someone solves another block because the system immediately switches to the longest branch available. Successful members obtain a small reward in Bitcoin. Thus, new coins are injected. 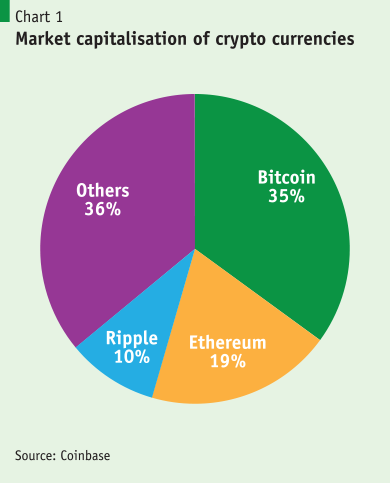 Total market capitalisation of crypto currencies as of 15 February 2018 is $471 billion. Bitcoin holds 35% of the total (Chart 1). The second largest market share-holder is Ethereum, with a market share of 19%. The remaining 1,528 crypto currencies hold the rest, enjoying varying degrees of market dominance.

The bubble has burst…

The price of most crypto currencies has plummeted, reducing market capitalisation from $750 billion to less than $500 billion in one month. The increase was obviously a price bubble, owing mainly to people’s speculation to gain from selling in the future. Technological advances and growing interest in security and privacy added fuel to this surge: fear of excessive control by government institutions may have pushed some towards crypto currencies.
On the supply side, crypto currencies may become costlier. Mining activities increase with price increases, which will force the profit margin to decline at a faster rate. The mining cost depends on making the correct guess to obtain the reward. As more miners join the pool, more time is required to generate the reward and more electricity is consumed. In near future, the price of Bitcoin will at best stabilise to reflect the cost of its production (after the burst of the expectation bubble), making this a textbook example of a zero-sum game.

Total market capitalisation of crypto currencies as of 15 February 2018 is $471 billion. Bitcoin holds 35% of the total.

Store of value, unit of account and medium of exchange are the basic functions of money. Crypto currencies completely fail to meet the second characteristic. For instance, prior to 2010, a notable transaction with Bitcoin was completed with Papa John’s, a US restaurant franchise company, delivering two pizzas in exchange for 10,000 Bitcoins. But now, with 1 Bitcoin, anyone can easily make a down payment for a luxurious Tesla S Series Car. That means the value of Bitcoin is pegged with traditional currencies, especially the US dollar. If Bitcoin’s value in dollar term increases, then its value increases, just like a barrel of oil or a chicken drumstick; both can be used to exchange with lesser volatility in value. 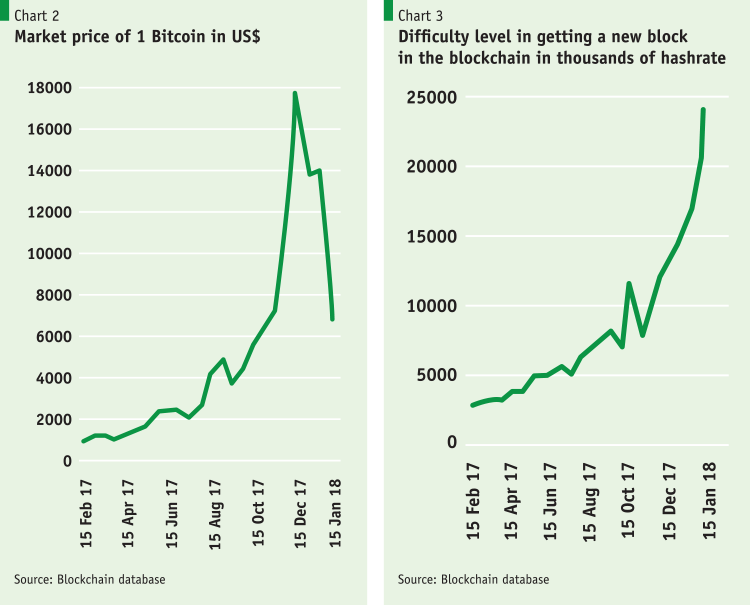 Cryptocurrency: Currency circulation and the importance of the central bank

Fiat currency is circulated after printing through a system of commercial banks to the masses and is monitored by the central bank (i.e. Bangladesh Bank). Now the question is, why does Bangladesh Bank have the sole authority over currency in Bangladesh? To answer this, imagine a scenario where everybody in the country has authorisation to print money using a typical printer. People would have to load a briefcase full of notes to buy an orange, meaning notes would be valued like used paper! Money stock also plays a significant role in investment (a shortage of taka can hike the interest rate and decrease investment); in employment (if investment decreases then it will have an adverse impact on employment opportunities); and in international trade and finance (e.g. excessive supplies of taka may put downward pressure on the exchange rate in terms of other currency, or the taka can depreciate, making imports costlier and exports more competitive in the international market).

For a capacity-constrained developing country like Bangladesh, the anonymous nature of transactions, their decentralised issuance and the lack of appropriate regulatory infrastructure can make it all too hard to deal with the Bitcoin and other crypto currencies.

Possible implications for the economy

Economies around the world are taking different steps to incorporate or vanquish crypto currencies, ranging from threats of punishment (Bangladesh Bank published an ordinance announcing 14 years in prison for anyone who deals in crypto currencies), to banning them (as China did in 2015), to imposing a tax on crypto currencies as financial assets (as in the US). Several economies, such as Sweden and Vietnam, are introducing their own forms of crypto currencies to make transactions easier. But among officials and economists there loom certain concerns regarding decentralised crypto currencies, including those related to tax evasion through laundering and their use as a medium for unlawful transactions. Many economists fear a dramatic decrease in the purchasing power of households, which will suffer as a result of the unavoidable bubble burst. 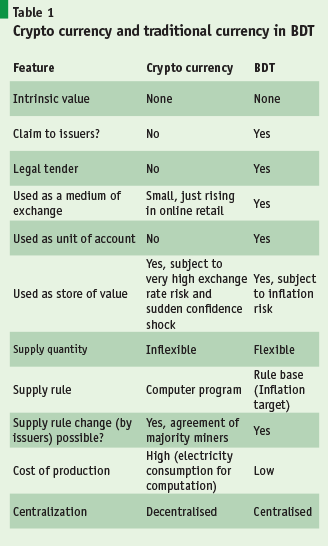 Bangladesh Bank has banned dealing in Bitcoins and other crypto currencies, making this punishable by law. Issues of concern include money laundering, funding of terrorist activities and capital flight, among others. For a capacity-constrained developing country like Bangladesh, the anonymous nature of transactions, their decentralised issuance and the lack of appropriate regulatory infrastructure can make it all too hard to deal with the Bitcoin and other crypto currencies.
However, in a globalised world, it can be very difficult to address challenges simply by putting restrictions in place. Transaction activities are likely to go underground. More importantly, a ban may actually discourage the acquiring of capacity in related areas that could have helped in the development of future financial regulatory infrastructure. Through thorough research and development, it may be possible to harness the positive features of cryptocurrency technologies (e.g. close to zero transaction costs, greater security from hacking, storing certain documents in a decentralised system to prevent fraud, etc.).
Some countries are already considering introducing digital currencies into their monetary systems. Bangladesh should monitor these developments closely in order to be able to understand and benefit from the potential implications of these initiatives.

Biplob Kumar Nandi is a Senior Lecturer of the Economics Department of East West University.