In Bangladesh, from the country’s very inception, agriculture has been a core sector of the economy. Though the sector’s share in the economy has been in decline, it still contributes around 15% of gross domestic product (GDP). Agriculture provides employment to some 43% of the labour force. Poultry, fisheries and other livestock amount to nearly 4% of the economy. Fisheries and the rest of the livestock sector have been playing a vital role in the development of the country’s agro-economy. They have been performing at a higher rate than the larger agriculture sector. Consequently, the feed mill sector has been expanding to provide backward linkage support to the livestock sector.
A calibrated focus on the feed sector is important part to ensure the country’s long-term food security. Though many strides have been taken to achieve nutritional balance, the population of Bangladesh is yet to overcome its protein deficiency. According to the World Health Organization (WHO), Bangladesh is on the lower end of global protein consumption. As part of animal protein consumption, the average Bangladeshi consumes an estimated 3 kg of meat annually. Meanwhile, in neighbouring India and Pakistan, the average person consumes 5 kg and 11 kg of meat, respectively. Similarly, Bangladesh’s per capita egg consumption is some 70 per year—nearly half of that of India. To put this low consumption in perspective with a high performer, in Japan the annual per capita egg consumption is 1,200. 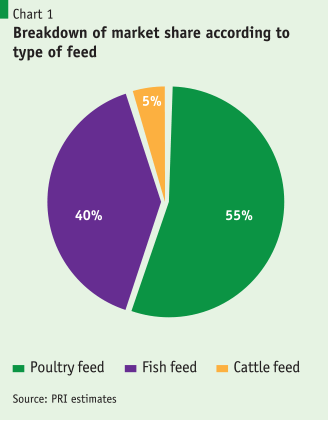 The Food and Agriculture Organization (FAO) reports that rates of malnutrition in Bangladesh are among the highest in the word. Despite recent successes in improving Bangladesh’s public health, 25% of the population is malnourished. In line with this problem of malnourishment, a significant number of children suffer from high levels of micronutrient deficiency. With the goal of tackling these pressing issues of protein deficiency, along with unmet demand for livestock, private investors have taken initiatives to set up commercial livestock, fisheries and poultry farms. Private actors have subsequently set up feed and other backward linkage industries to support the fisheries and livestock sector.

According to a 2016 report by FAO, China and India alone hold 40% of the global feed market. Bangladesh is the fifth largest producer of feed but its share of the global feed market is merely 1.5%. In Bangladesh, animal feed is the most important component in the production of animal proteins. According to authors’ estimates, feed amounts to more than 50% of the market cost of animal proteins (fish and meat). Feed producers are positioned to make the livestock sector more sustainable by raising the quality of animal proteins, while reducing the cost to consumers. The contribution of the feed mill industry can simultaneously help secure Bangladesh’s long-term food security, boost employment and reduce poverty. The feed industry has been growing at a steady rate of 8–10% annually. Despite this, many logistical and policy-related challenges continue to hinder the industry’s growth.

According to authors’ estimates, feed amounts to more than 50% of the market cost of animal proteins (fish and meat). Feed producers are positioned to make the livestock sector more sustainable by raising the quality of animal proteins, while reducing the cost to consumers.

Currently, there are approximately 140 feed manufacturing companies in operation throughout Bangladesh. The industry watchers claim that the feed sector directly or indirectly provides a livelihood to some 5 million people. The majority of the demand for feed comes from the poultry industry. The poultry sector consumes more than 50% of total feed produced. The remaining feed is consumed by fisheries, with a mere 5% consumed by cattle. Based on authors’ estimates, the current annual market requirement for feed is approximately 4.7 million metric tonnes/year. To put it simply, the market size of the feed sector in Bangladesh is $2.5 billion. 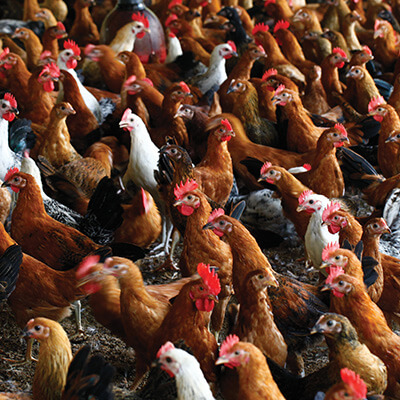 However, current supply is only 4 million metric tonnes/year, indicating an 18% supply deficiency. In other words, the feed sector is experiencing a saturated market, where demand exceeds the quantity supplied. It must be noted, however, that several market actors have reported that their estimates do not match those of the authors’. They claim that no market gap exists. In fact, according to some reports, the full production capacity of the feed industries is not being utilised. As such, there is no space for further feed production. Basic assessment does not support this claim because new actors and fresh investments are rushing into the sector. Among the newcomers, prominent companies such as Partex Group, SA Group, RFL-PRAN Group and Meridian Group are all reportedly setting up feed mills.

Market dynamics show demand for poultry feed decreases during November to February. It increases during July to September. Fish feed demand follows a similar pattern. Fish feed incurs a heavy loss whenever there is a lengthy monsoon. In other words, the sector is very seasonal. Market players often have to deal with unforeseen consequences posed by nature. Production, storage and other logistics have to be adjusted accordingly. Bangladesh exports barely any feed, thus it is difficult for producers to mitigate their capacities in such a fluctuating market. Moreover, storage and transport facilities in the industry are not very cutting-edge. In this light, production has to be adjusted in such a manner that turnover remains artificially high. 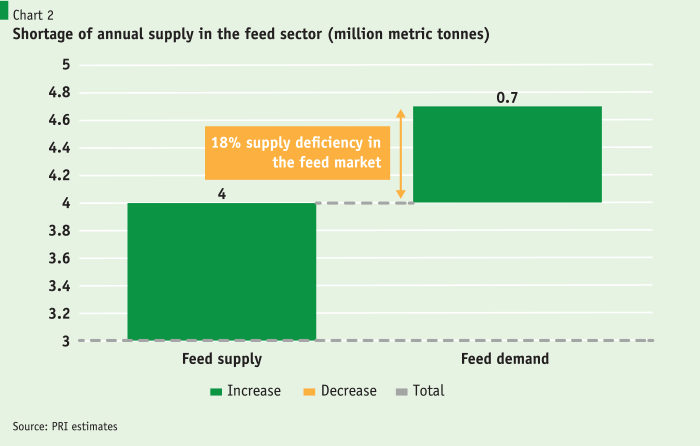 Geographically, the belt comprising Dhaka, Gazipur, Mymensingh, Norsingdhi, Comilla and Chittagong represents the highly populated area of Bangladesh. According to a country diagnostics report by the World Bank, this belt generates some 60% of the country’s GDP and also has higher per capita income than rest of the country. According to the authors’ estimates, daily consumption of eggs, meat and fish in this belt is near 50% of total production. Accordingly, most feed mills and livestock farms are concentrated between Dhaka-Chittagong poles. However, feed mills have been slowly extending to the northern and southern parts of Bangladesh in the past five years. Outside of the Chittagong and Dhaka corridor, Khulna boast the highest percentage of inland water fish production and as a result has very high demand for fish feed among all regions of Bangladesh.

The main ingredients required to produce feed include maize, soybean, rapeseed, fish meal and meat and bone meal. These ingredients are largely imported and have significant duty taxes imposed on them. For example, maize and soya (the top two ingredients) have duty taxes of 12% and 7%, respectively. Other raw materials are similarly taxed. This contributes to raising the already high costs of raw materials. In the production of feed, raw materials make up to 70% of total costs. The remaining costs are spent on production, transport and packaging. As demand for feed grows, demand for major raw materials also continues to rise.
Bangladesh is not self-sufficient in producing these raw materials. Local producers are heavily reliant on imports from countries like Brazil, India and the US. In addition, micro-ingredients like vitamin pre-mix, amino acids and other nutritional premixes are almost entirely imported. Variations in the price of imported feed ingredients are linked with factors such as fluctuations in the international market, changes in import policies and external relations with exporting countries. Only 40% of maize, which is the main ingredient in feed production, is sourced in Bangladesh. Similarly, 60% of soybean (another vital ingredient) is imported from India. To add to the problem, industry players report that the price of raw materials can increase up to 30% annually.

Bangladesh is not self-sufficient in producing these raw materials. Local producers are heavily reliant on imports from countries like Brazil, India and the US. In addition, micro-ingredients like vitamin pre-mix, amino acids and other nutritional premixes are almost entirely imported.

Adulteration of raw materials is another major problem for feed producers. For example, fishmeal, which is used in the production of fish feed, is often mixed with other protein meals. This reduces the quality of feed. A large part of the adulteration of raw materials occurs at the early import level, way before it gets to the factories for production. The government currently has no regulatory facilities in place to ensure the quality of imported raw materials. Individual companies have attempted to set up labs for testing but they lack advanced technology to accurately detect adulterated raw materials.
The major players in the feed industry include Paragon, Nourish, Paragon, Kazi, CP, Aftab, and Quality. The top 10 companies (out of 140) in the industry currently hold some 75% of the market share, while the remaining ones have only a 25% market share. In other words, the top 7% of market players control nearly 75% of the market. Many of these conglomerate companies produce feed for internal consumption at their commercial livestock farms. As a result, the poultry industry is being centralised because the same companies are producing feed, meat and eggs. 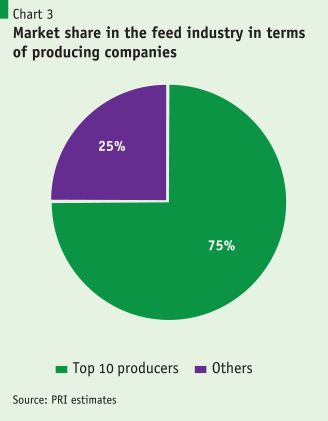 The large scale of operations and the internal linkages between feed production and livestock farming by the same company makes cost cutting very successful for such companies. Both small feed producers and small livestock farmers find it difficult to compete in such an evolving market. The feed industry is also very capital-intensive. Hence, small producers face high barriers to entry because economies of scale are very difficult to attain.

Large companies also tend to purchase raw materials in bulk, which gives them a cost advantage. They distribute to smaller feed producers that have no choice but to purchase raw materials at a higher price from large producers/traders. In Bangladesh, 1 kg of 5 mm pellet feed, the most popular kind, is priced at an average of Tk. 45/kg, while the same product costs Tk. 40/kg in India and Tk. 42/kg in China, indicating a 5–10% higher price point. It is important to note that the feed market in Bangladesh is not as competitive as in China, mainly because all raw materials in China are sourced locally.

Towards a more sustainable feed sector

The high price of raw materials, high capital intensiveness, inability to meet increasing demand and attaining economies of scales are thus some of the main problems facing the feed sector. The sector can thus be improved on several fronts. Attention should be given to improving the existing supply chain. Many producers are attempting to improve management so that feed producers can supply directly to retail shops without having to go through a costly broker. Intermittent electricity and gas supplies also hinder efficient production. A stable gas supply is vital for feed production, as feed requires cooking. As a result, many factories are closely located in Gazipur–Mymensingh, where a relatively stable gas supply can be found. Experts in the sector have suggested the creation of a ‘Feed Economic Zone’, as part of the government’s 100 Economic Zones (EZs) initiative. This could help overcome the utilities-related challenges, as these EZs offer organisational flexibility and a stable supply of gas and electricity.

Some flashpoints for policy interventions and market correction for the sector may be as follows:

The feed mill industry offers immense potential despite the many challenges facing producers. With disposable income in Bangladesh rising, aggregate demand for protein has also gone up. The feed market acts as the backbone for the poultry, livestock and fisheries industry. The increase in demand for protein is bound to raise the production of poultry, fisheries and cattle. Inevitably, it will thus also increase the demand for feed. Bangladesh still remains a protein-deficient country. In order to achieve sufficient protein standards, strategies to reduce the cost of animal feed and improve its quality need to be adopted. There is no way around this: it is integral to the country’s food security and nutritional requirements.

Syed Mafiz Kamal is a Senior Analyst at the Centre for Research and Information (CRI), Dhaka. He was formerly a senior researcher at the Policy Research Institute of Bangladesh. Previously, he worked at the UN system in New York in different capacities. He completed his graduate studies in International Relations and Political Economy from New York University. His research interests are in the topics of agroeconomics, political economy and regional integration.

Tasfia Jashim was 2018 Summer Associate at the Policy Research Institute.