Bangladesh has shown strong resilience and dynamism by rising rapidly from the ruins of a war-devasted economy in 1972 that was characterized by high incidence of poverty (around 80%), low per capita income (less than USD 100) and badly damaged infrastructure. In 2015 Bangladesh crossed the threshold of the World Bank-defined lower middle country (LMIC). In FY2018, per capita income stood at $1767, poverty rate was estimated at around 22% and GDP growth accelerated to 7.7%. Buoyed by these achievements Bangladesh now aspires to secure upper middle-income country (UMIC) status and eliminate extreme poverty by FY2031. The target GDP growth rate from FY2019-FY2031 is projected at around 9% per year.

A macroeconomic framework has been prepared in the context of the government’s Perspective Plan 2041 (PP2041). The projections are built around major changes in policies and institutions. The public resource mobilization task is particularly challenging that seeks to raise total revenues as a share of GDP from 10% in FY2018 to 20% by FY2031 and tax revenues from 8.7% to 17.4% over the same periods. These amount to a near doubling of the tax and total revenue mobilization efforts over 12 years. The ability to achieve the tax effort target will determine the success with the total revenue mobilization effort. 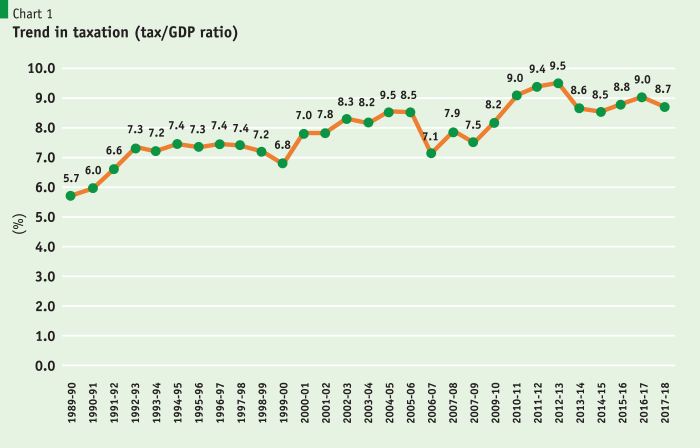 As against these ambitious tax targets, the tax performance in recent years (Chart 1) shows that the tax/GDP ratio has grown modestly over the past 28 years (3 percentage points on aggregate).
When the more recent years are considered (FY2010-FY2018), the tax to GDP ratio has basically stagnated, fluctuating around 9% of GDP. This is the lowest tax performance in South Asia and among the lowest in the world (Chart 2). 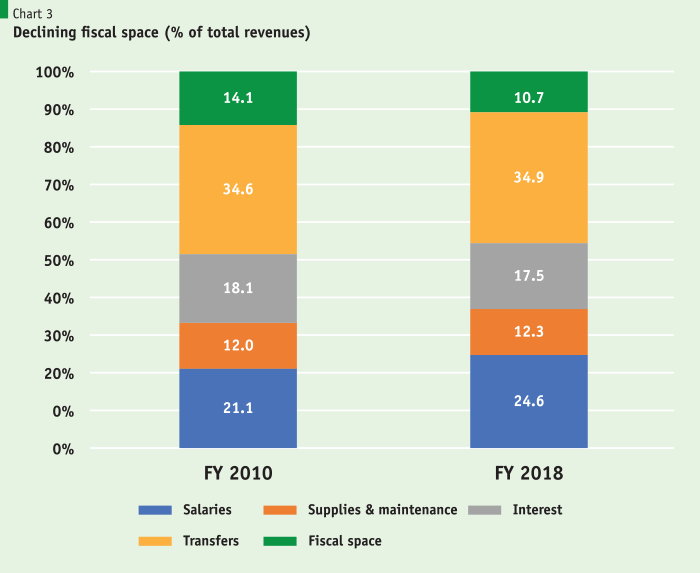 Level of development and tax handles

A major issue is why the tax/GDP ratio has remained stagnant at around 9% of GDP over the past decade or so despite rapid strides in GDP growth that has caused per capita income to accelerate from $800 in FY2010 to $1767 in FY2018. The very low tax performance of Bangladesh relative to countries at similar per capita income level is striking (Chart 4) 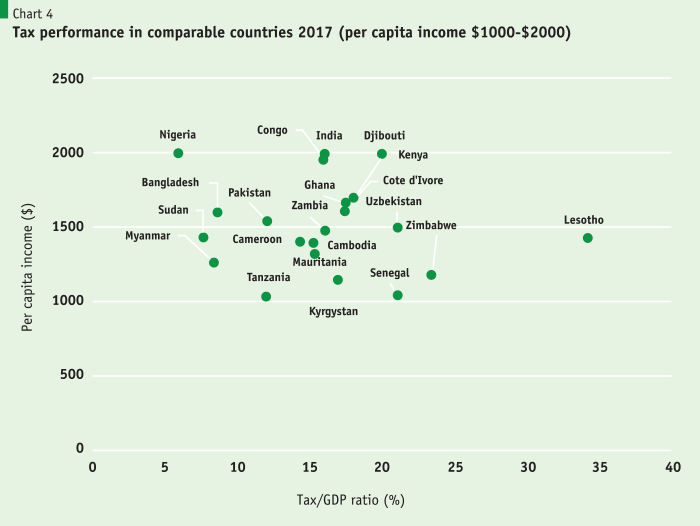 suggesting that Bangladesh is a negative outlier in the area of tax performance. This suggests that the low level of development is not the main concern but there are other factors at play including the government’s tax reform efforts, tax administration and willingness to pay.

Tax reforms have generally taken a back seat in Bangladesh. The last major tax reform was done in 1991 when the value added tax (VAT) was introduced. Since then, the tax system has been occasionally tweaked particularly in the area of international trade taxes but the underlying motivation was to reform the heavily protected trade regime often as condition for access to international funding. Indeed, once the heavily protected trade regime was brought down to more moderate levels, trade taxes re-emerged as a major tool for revenue mobilization. The government sought to re-engage in tax reforms in FY2011when it announced a major tax modernization plan. This was a fairly ambitious reform program that sought to modernize the Bangladesh tax system including reforms of tax laws, tax institutions, tax administration and capacity building. The record shows very little progress with its implementation. Some limited progress was achieved in the computerization of VAT administration but overall tax administration remains as constrained as before. In 2012, as a part of its Extended Credit Facility (ECF) agreement with the IMF, the government adopted a new VAT Reform Act that aimed at modernizing and expanding the scope of the VAT. The reform promised to improve the efficiency of VAT collection and raise substantial new revenues. So far, the VAT Reform Act 2012 remains in paper and has not been implemented in view of opposition from vested interest groups.

It is well known that weak tax administration can be a serious constraint to tax resource mobilization in developing countries. A particular challenge is the ability to administer an efficient and progressive personal income taxation. Thus, a major difference between developing and developed countries is the share of personal income taxation. High- income developed countries on average raise about 16% of GDP as personal income taxes, accounting for about 50% of total tax revenues. As compared to this, low-income countries collect about 2.3% of GDP and low-middle income countries mobilize 2.7% of GDP. Bangladesh collects a mere 1.3% of GDP as personal income taxes (FY2018) and this ratio has grown only marginally (it was 1% of GDP in FY2010) even as per capita income more than doubled over the past eight years.
At the heart of the personal income taxation problem is the low level of compliance. Few of the potential income tax payers actually pay taxes. Tax evasion is particularly large at the highest levels of income. A range of factors explain this tax evasion problem including legal tax exemptions and loopholes, political connections, corrupt practices, complexities of tax assessment and collection, inefficient tax audits and high marginal rates of taxation.
In the case of corporate taxes, similar problems exist as for income taxes. An added problem is the large informal economy. Most small and micro enterprises escape the tax net because they operate outside the formal system and are not registered with the government either through business licenses or through tax identification number.
Problems of tax administration also prevail in the case of the VAT, especially in the matter of small and micro enterprises. The VAT has seen some improvement in administration in recent years through the ongoing tax computerization and administration reform efforts. Nevertheless, the productivity of the VAT remains low.
Administration of taxes on international trade is more organized and better administered. The main problem here is tax evasion based on corrupt practices. This is a governance challenge that permeates throughout the tax administration.
A generic problem in tax administration is low tax capacity. The National Board of Revenue (NBR) lacks autonomy and is run like any other government department. It is staffed by civil servants. Its primary focus is tax collection through policing and threats. There is no concept of tax service or seeking voluntary compliance through user-friendly approaches. There is very little capacity to do tax policy analysis. Tax changes are made in almost all budgets. There is little analysis of the true revenue and resource allocation impact of these changes. Numerous efforts to upgrade the capacity of the NBR to improve tax collection and tax policy analysis have failed owing to lack of political and administrative support. Frequent changes at the top (chairman NBR) has further reduced the ability to reform NBR.

Willingness to pay – demand side issues

It is commonly acknowledged that few people willingly want to pay taxes. The user-friendly nature of the tax system and the strength of the legal compliance features tend to be the main determinants of tax compliance. Yet, there is empirical evidence that the quality of governance tends to play an important role in tax collection. While this is considered a demand side variable, it tends to work on the supply side as well. Countries that have better governance not only tend to increase citizen consciousness and interest in paying taxes as a means to support national development and general welfare, they also correlate well with cleaner politics and better tax administration that affect the supply side of the tax effort equation.
Governance challenges facing Bangladesh are well known. For example, international ranking on corruption prepared by Transparency International (TI) puts Bangladesh at the bottom 15% of countries ranked (149 out of 175 countries) for 2018. The World Bank governance indicators (2017) rank Bangladesh as follows: voice and accountability (30th percentile); Political stability and absence of violence/ terrorism (10th percentile); government effectiveness (22nd percentile); regulatory quality (21st percentile); rule of law (28th percentile); control of corruptions (19th percentile). These suggest that there are major governance issues and challenges in Bangladesh that might serve to constrain tax performance.

As noted, the target to reach upper middle-income status and eliminate extreme poverty by FY2031 requires a doubling of the tax/GDP ratio over the next 12 years. The imperative for tax reforms is obvious and must start immediately with the forthcoming FY2020 National Budget. The main focus of tax reforms has to be to raise the revenue base for income and consumption taxes while reducing reliance on trade taxes to eliminate the anti-export bias of trade protection. The VAT reform preparations are well advanced and the government intends to implement the new VAT law during the FY2020 Budget. This is a welcome development. On the trade front the policy challenge is to reduce trade protection by lowering maximum tariffs and the coverage and magnitude of supplementary and regulatory duties. This reform is not intended to generate new revenues. From the revenue perspective, the biggest challenge is the reform of income taxes. 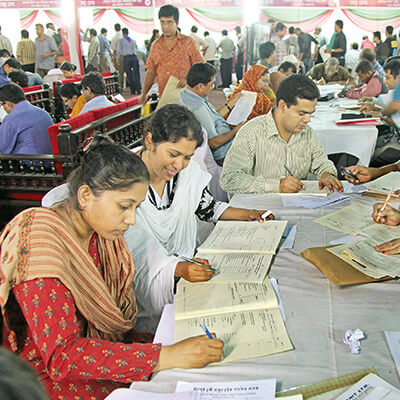 Government revenue is low mainly because of inadequate revenues from personal income taxes. Bangladesh collects a mere 1.3% of GDP from personal income taxes while the top 5 percent of the population owns 25% of the total national income. This yields an effective income tax rate of 4%, which is very low. While efforts are underway to improve income tax collection, the effort is concentrated unevenly on fixed income earners. Personal income from business, capital gains, stocks and the like tend to escape substantially the fair share of taxation. Similarly, there is minimal tax effort at the local government level. Remarkably, there is no effective property tax collection system. Capital gains from land transactions and stock ownership mostly escapes taxation with a nominal levy. The absence of a modern universal personal income tax is a major contributor to low tax effort in Bangladesh.

Bangladesh collects a mere 1.3% of GDP from personal income taxes while the top 5 percent of the population owns 25% of the total national income.

It is high time that the government makes a serious effort to reform the income taxation regime.

Several actions can be taken including streamlining the corporate tax rate in a series of steps. As a first step, with the exception of tobacco, the maximum rate of taxation should be lowered starting with 30% in FY2020 and 25% in FY2021. As rates come down, exemptions and tax holidays for FDIs or specific sectors must be eliminated over a well-defined period so that by and large all investors are required to pay taxes. Once the tax rates are lowered and made internationally attractive, exemptions will not be needed. Capital flight for taxation purposes will not be an issue because the investor will have to pay taxes in other countries as well.

As a first step, with the exception of tobacco, the maximum rate of taxation should be lowered starting with 30% in FY2020 and 25% in FY2021.

The personal income reform needs a substantial overhaul based on further research and analysis. The required reform is to lower the marginal and average tax rates and to increase the tax base through voluntary compliance. Bangladesh can learn the lessons from the positive experience with income taxation from other countries. These lessons include:

Most upper middle income and high-income economies have a well-established system of fiscal decentralization whereby the property taxes are assigned to local governments as the major source of tax revenues. In Bangladesh this political decision is yet to happen, although imminent as Bangladesh aspires to attain upper middle-income status.

Sadiq Ahmed is the Vice Chairman of the Policy Research Institute of Bangladesh. He was previously at the World Bank, serving as country director for Pakistan and Afghanistan and chief economist for the South Asia region. He also led key missions to Egypt, South Asia, and Southeast Asia. He completed his PhD in Economics from Boston University. He has worked on topics of poverty reduction, governance, private sector, trade and macroeconomic. He has authored more than 30 books, policy research papers and articles on various development issues.