When the present Awami League government came into power in 2009, they were faced with two major problems in the energy sector. Firstly, the development activities in different sectors were affected due to an inadequate supply of electricity as the demand always exceeded the supply by 2000 Megawatt (MW) on an average between 2000-2009. Secondly, more than 80% of the electricity in Bangladesh was produced by natural gas up to 2009. However, since the supply of natural gas would run out by 2031 at the prevailing extraction rate, the government wanted to strengthen the fuel diversification process for the future energy security of the country 2031 (Amin and Rahman, 2018). 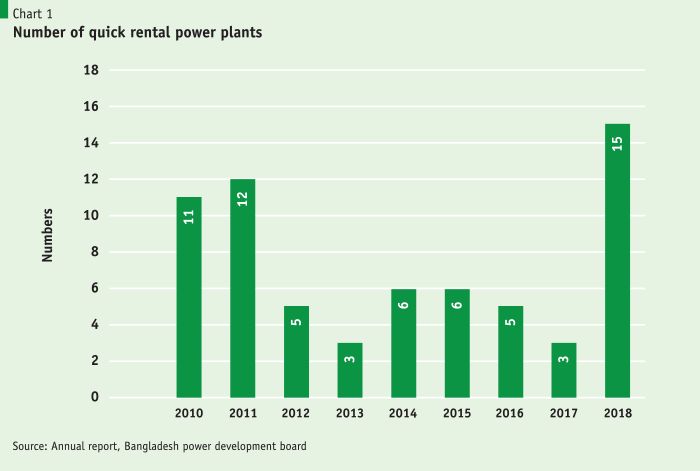 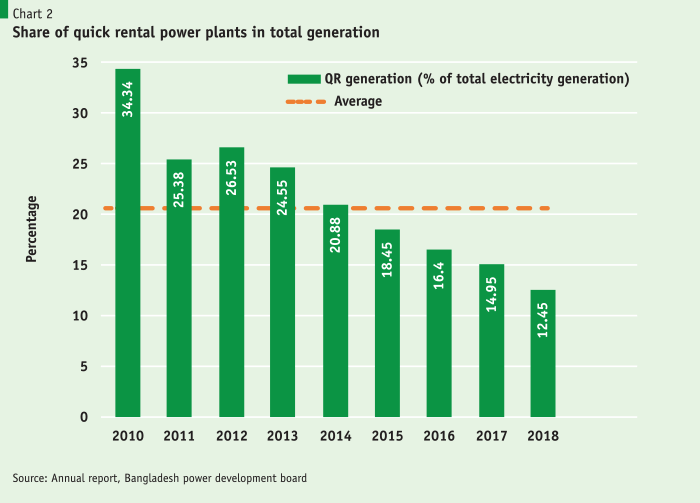 The introduction of these QR power plants has played a crucial role in landscape success in the energy sector over the past 10 years (Table 1). For instance, net installed electricity generation capacity had increased from 5272 MW in 2009 to 16892 MW in 2018, and per capita, electricity generation has consequently risen from 220 Kilowatt Hours (kWh) to 464 kWh between 2009 and 2018. Accessibility of electricity has also been increased from 47% in 2009 to a whopping 91% in 2018. These achievements are in line with the government’s commitment to ensuring access to affordable and reliable electricity for all citizens by 2021. 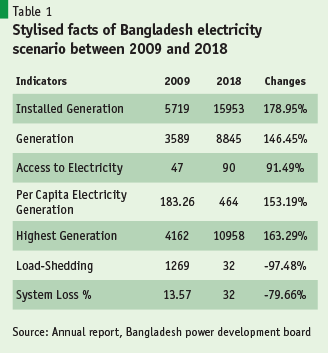 Moreover, these QR companies have made a significant positive impact in Bangladesh economy through the development of different sectors like the industrial sectors, commercial sectors, and the agricultural sectors and helped to maintain the GDP growth rate over 6% despite the global recession and other shocks. According to Mujeri and Chowdhury (2013), at the aggregate level, the estimated relationship between GDP and electricity generation shows that an extra economic output within the range of BDT 46 million to BDT 107 million (at constant 1995/96 prices) is generated for every 1000 MW increase in electricity supply in Bangladesh.

…at the aggregate level, the estimated relationship between GDP and electricity generation shows that an extra economic output within the range of BDT 46 million to BDT 107 million (at constant 1995/96 prices) is generated for every 1000 MW increase in electricity supply in Bangladesh.

Even though QR power plants have increased the electricity generation, the increased use of liquid-fuel in energy sector raises many ethical dilemmas in our energy system as it added to the fiscal burden. The use of imported High-Speed Diesel (HSD) and Furnace Oil (FO) had increased from around 5% in 2009 to 29% in 2018 (Chart 3). The total value of imported petroleum products has also raised by nearly 2 times during the last 10 years. Accordingly, the government’s public expenditure budget got inefficiently allocated to pay the corresponding import bills (Amin and Rahman, 2018). 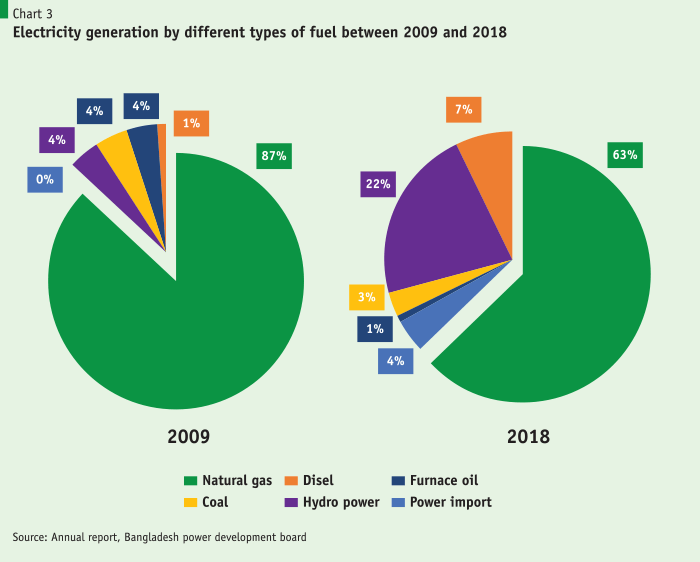 The government also sells the energy at a subsidised price to support the electricity producers as the oil market is very volatile across the world. Due to the dependence on the QR power plants and the petroleum products, the size of the energy subsidies exceeded 3% of the GDP in 2015. Table 3 shows that the loans and subsidy to the energy sector have increased almost 4 times during 2009 and 2019.

Furthermore, due to the installation of these HSD and FO fired QR power plants, average power supply costs have also increased to BDT 6.25/kWh in 2018 from BDT 2.62/kWh during 2009 (Chart 4). The BPDB generates electricity from FO at the cost of BDT 19.28/kWh and from HSD at BDT 35.84/kWh (Amin and Rahman, 2018). Only wind-based generation is more expensive than this at BDT 37.76/kWh, in part due to a lack of economies of scale of this renewable source. Whereas the electricity purchase rate from gas-fired power plants is around BDT 2 per unit and from coal-fired power plant it is around BDT 3 per unit. Government borrowing from the banking sector also keeps increasing mainly due to funding for loss-making state-owned entities, including the Bangladesh Petroleum Corporation (BPC) and BPDB. 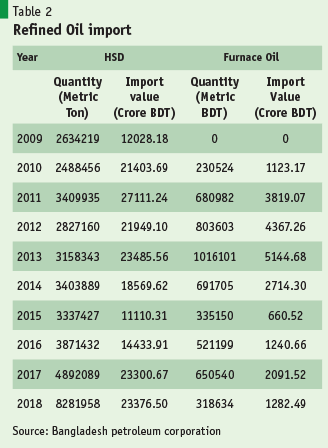 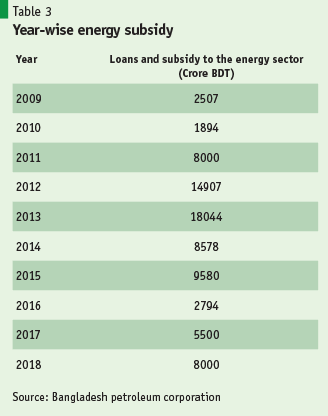 But, the continuation of these policies will affect the long-run sustainable electricity generation capacity of Bangladesh as the expense of high per unit generation cost to be borne by the government in the form of higher subsidies. Moreover, since Bangladesh needs to import oil, the country is more exposed to oil price shocks in the international market. Therefore, there is an ongoing discussion in policy circles on whether to renew the QR contracts or close them down. Experts stress on the fact that the government’s over-reliance on the oil-fired QR power plants may create problems, in the long run, energy security. So, a thorough economic analysis is needed regarding the QR power plants, and this article presents the key results of a Dynamic Stochastic General Equilibrium (DSGE) model augmented paper to assess whether closing down the QR power plants would be beneficial or detrimental for the Bangladesh economy.

The framework of this paper is based on Amin (2015), who develops a Dynamic Stochastic General Equilibrium (DSGE) model for the Bangladesh economy. The underlying assumptions, in particular, the functional forms of household preferences and technology follow the seminal work by Kim and Loungani (1992) and Amin and Marsiliani (2015). Modern macroeconomics is based on DSGE models which are built on microeconomic foundations (Wickens, 2008). DSGE models are dynamic, focusing on how the economic variables evolve over time. These models are also stochastic because they consider the fact that the economy is affected by random shocks such as technological change, fluctuations in the price of oil, etc. DSGE models are becoming more popular among the energy researchers as they can facilitate the forecast of the changes in the degree of welfare that would be caused by a change in market conditions. 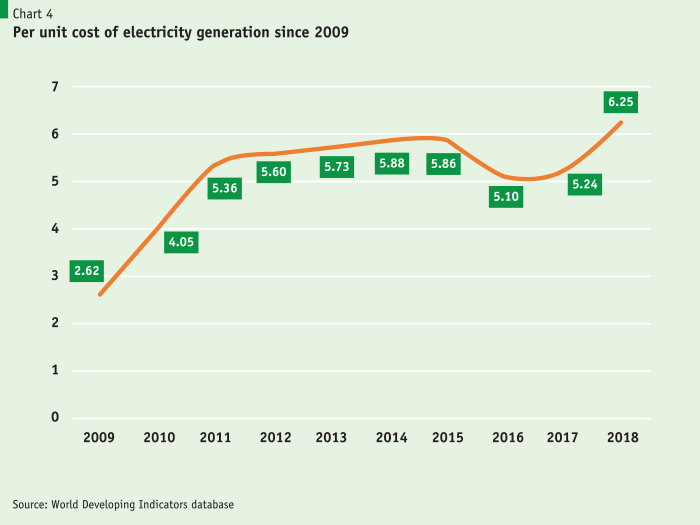 Our results reveal that at the steady-state, a shutdown of the QR power plants increase the GDP by 0.45%, and increase the household welfare by 1.87% in Bangladesh. We also find that there is a decrease of 10.5% in the electricity subsidy associated with government-regulated electricity prices. Furthermore, since the government does not need to import oil for the QR power plants when they are shut down, we observe a decrease in the imported fuel subsidies equivalent to 0.44% of GDP. Here, it is worth mentioning that there are two types of electricity subsidies in Bangladesh. One type of subsidy lowers production cost through subsidised fuel in electricity generation. Another type offers electricity tariffs for groups of consumers (including residential customers and farmers) that are lower than production costs.

Moreover, the question arises whether QR companies affects negative impacts in the long run. It should be ensured the benefits of QR companies will outweigh the cost of the negative consequences by fiscal burdens. The government is selling the electricity at a subsidised price due to the high-cost production of the rental power plant electricity. This is putting a lot of pressure on the budget as the deficit is increasing. The other sectors, such as education, health care, and infrastructure, are losing out because of the wastage of funds in filling out the deficit (Amin et al., 2018).

The government aims to produce energy by the plethora of ways, including 35% by coal, 35% by natural gas, 10% by renewables, 11% by cross-border electricity trading and 6% through nuclear power by 2041.

We argue that decisions should be taken from ethical considerations. Our results support the fact that in the long run, QR power plants will reduce the GDP and welfare. Therefore, we recommend that the Bangladesh government starts phasing out the QR power plants and look into other alternative fuels for electricity generation. Bangladesh government has already signed for nuclear power and state-owned and private coal-based plants to generate electricity. The government aims to produce energy by the plethora of ways, including 35% by coal, 35% by natural gas, 10% by renewables, 11% by cross-border electricity trading and 6% through nuclear power by 2041. Since it will take another few years to start generating electricity from the alternative sources, it is acceptable to run the QR power plants until 2024. However, after that, the government should grant less costly energy policies and solutions where less imported fossil fuels are needed, and more focus should be given to renewable resources. It is also expected that alternative policies will remove the burden of short-term QR power plants in the long run.

CPD (2019), “The Power and Energy Sector of Bangladesh: Challenges of Moving Beyond the Transition Stage”, Policy Paper 2019.

Sakib Bin Amin is an Associate Professor in the Economics Department at North South University.