Bangladesh has enjoyed 10 years of economic prosperity between FY2009 and FY2019. This period saw per capita income rise from USD 754 to USD 1909, life expectance increased from 67 years to 73 years, adult literacy expanded from 58% to 75%, moderate poverty incidence fell from 35% to 20% and extreme poverty rate declined from 18% to 10%.  Growing at an average pace of 7% per year during this period, Bangladesh is amongst the fastest growing countries in the world. As a result, Bangladesh climbed up from the World Bank-defined list of low-income countries (LIC) to Lower Middle-Income Country (LMIC) in 2015.  In 2018, it met the UN criteria to graduate from the list of Least Developed Countries (LDC).  Inspired by these successes, the government adopted the Vision 2041 and the associated Perspective Plan 2041 (PP2041) that sets the road map to become an Upper Middle-Income Country (UMIC) and eliminate extreme poverty by FY2031 and achieve High Income Country (HIC) status by FY2041.

In early 2020, an unforeseen and unprecedented global pandemic COVID-19 emerged. The furious and devastating nature of this fast-spreading pandemic has shaken the entire world.  Millions have been infected and hundreds of thousands have died.  Lockdown measures necessitated to slowdown the rate of growth of COVID-19 spread has badly damaged the world economy.  Despite pouring in trillions of dollars in relief and economic stimulus, the OECD countries have tumbled into a recession. Global efforts are underway to find health solutions to fight the pandemic, but the end is not yet in sight.

Bangladesh has also been hit hard both on the human health front and on the economy.  Fortunately, the level of known infections and deaths are modest in relation to many parts of the world including the neighboring India, although the peak of the pandemic is not yet in sight. On the economic front, losses are unprecedented.  GDP growth has slowed considerably, export earnings are down sharply, external remittance prospects are uncertain, private and public investment rates are down and government fiscal revenues have been badly hurt.  The government has moved to contain the damage by taking actions on both the human health front and on the economy. On the economic front, the government has adopted a series of relief and economic stimulus packages estimated at BDT 900 billion (3.2% of GDP) with a view to protecting the income of the poor and vulnerable and helping the revival of economic activities. 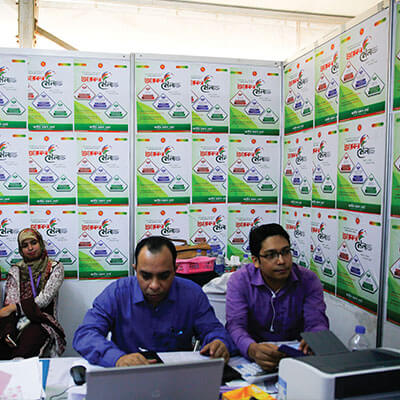 Consistent with the practice elsewhere in the world, Bangladesh has decided to open up the economy from June 01, 2020 to avoid a sustained long-term damage to livelihoods.  A new National Budget was adopted for FY2021.  The Budget sets highly ambitious targets for growth of revenues and expenditures, but without any strategic framework concerning how these revenues will be mobilized. It is understandable that in an environment of economic downturn owing to COVID-19, the implementation of any meaningful tax reform during FY2021 will be a tough task. Some degree of flexible financing through bank borrowings will be essential to address the COVID-19 challenges. Yet, as the government prepares for economic recovery in 2021 underpinned by global progress with COVID-19 vaccine/ cure, the government must also prepare for a medium-term revenue mobilization plan that is consistent with the government’s targets set in PP2041.   Adopting tax reforms and getting ready to implement them will take time and the lead for the preparatory work must start now.  Using deficit financing instruments for meeting critical expenditure needs for a year or two may be fine, but this cannot be a sustainable approach to fiscal management and will be inconsistent with the objectives and targets of PP2041. Thus, without adequate preparatory work that identifies the government’s medium-term fiscal framework for the next 5 years under the 8th Five Year Plan (FY2021-FY2025), the fiscal risks to securing the targets of PP2041 will greatly intensify.

The need for reforms

The imperative for tax reforms are illustrated by two striking facts:

First, Bangladesh has one of the lowest tax to GDP ratio in the world, and most unfortunately it has been declining in recent years (Chart 1).  Bangladesh collects 8-9% of GDP as taxes, while the average tax rate is 20% of GDP in UMIC and 14% of GDP in LICs (Table 1). 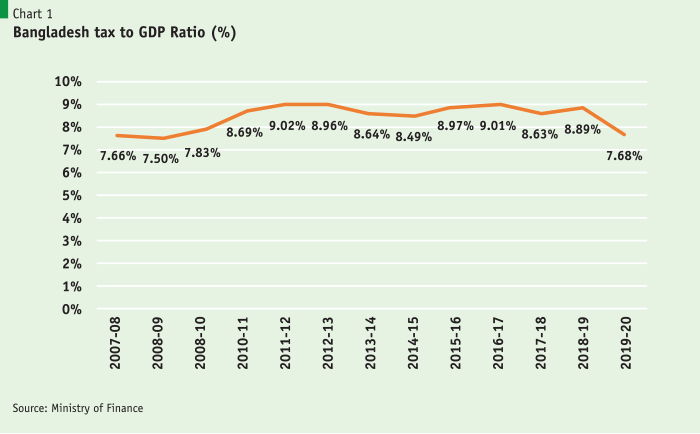 Second, the structure of taxes is primitive and a negative outlier by international standards (Table 1).  While UMICs collect 8% of GDP as income taxes and 9.5% of GDP from VAT, Bangladesh collects only 2.6% of GDP from income taxes and 3.3% of GDP from VAT.  Unlike other UMICs, Bangladesh is heavily reliant on trade taxes that distort resource allocation, especially by hurting export industries and favoring inefficient import substitution through heavy trade protection.

Although COVID-19 has hurt the FY2020 tax performance, the tax problems are long-standing and deep rooted, as indicated by the long-term decline in tax performance and the pre-COVID-19 weak tax structure (as of FY2019). With this poor tax performance, Bangladesh will find it difficult to meet the development needs of an UMIC and therefore will not likely reach the defined target.

While Bangladesh seeks to achieve UMIC by FY2031, its tax effort and structure are weaker than even the average for LICs. Although COVID-19 has hurt the FY2020 tax performance, the tax problems are long-standing and deep rooted, as indicated by the long-term decline in tax performance and the pre-COVID-19 weak tax structure (as of FY2019). With this poor tax performance, Bangladesh will find it difficult to meet the development needs of an UMIC and therefore will not likely reach the defined target. Consequently, urgent tax reforms are needed, which must be initiated now in order to get the benefits in the next 2-3 years.

What explains the poor performance: Diagnostics

Bangladesh tax structure is primitive because it has not reformed its tax system for a long time.  Consequently, revenue shortages are creeping up creating problems for funding core spending in health, education, social protection, water resources, agriculture and infrastructure.  The last tax reform was done in 1991 when the new Value Added Tax (VAT) was introduced as a replacement for sales and excise duties.  Another reform effort was attempted in 2011 by the adoption of the Tax Modernization Plan 2011-15, but it was never implemented. A third attempted reform was the planned overhaul of the low-productivity and inefficient VAT system with the new VAT Law 2012, which was a smart move but has not been implemented.

There is no tax planning or tax policy analysis capacity.  As a result, tax targets are politically set at the last minute of the new budget cycle with no relationship with reforms and tax capacity constraints.  The NBR scrambles to find easy tax handles, and inevitably ends up by relying on import duties, the tobacco taxes, bank accounts, mobile phone users, the foreign telecom enterprises, and harassing those who comply with tax laws to pay more. These have caused serious distortion of tax policy for investment, discouraged FDI, created disincentive to the spread of ICT as it is faced with one of the highest tax structures globally, and punished the voluntary tax payers.

The income tax structure is complex, discretionary, with multiple exemptions, and ridden with corruption. The concept of universal income as a tax base does not exist because many sources of income are exempt (tax holidays) or treated very lightly (e.g. capital gains tax).  The tax rates are high but tax compliance is low. Negotiated informal settlements are rampant, causing a serious revenue erosion.  The tax administration has low capacity and functions as a bureaucracy with frequent changes in the NBR chairman.  The NBR is run manually with frequent interface between taxpayer and tax collector, and administered in the spirit of a “police” department rather than as a revenue service agency. The income tax forms are complex and filing requirements frighten many voluntary compliances, as tax filers are scared of facing harassment from NBR. The World Bank Cost of Doing Business has highlighted tax filing as amongst the top 6 negative factors for the high cost of doing business in Bangladesh that discourages FDI.

The World Bank Cost of Doing Business has highlighted tax filing as amongst the top 6 negative factors for the high cost of doing business in Bangladesh that discourages FDI.

Critical reforms of the tax system

The core tax reforms will comprise of two elements: strengthening the tax institutions for sustained long-term progress, and reforms of individual taxes to yield higher revenue productivity and lower distortionary effects on incentives.

The core tax reforms will comprise of two elements: strengthening the tax institutions for sustained long-term progress, and reforms of individual taxes to yield higher revenue productivity and lower distortionary effects on incentives.

Reform of the VAT

The current VAT system is inefficient and suffers from low productivity.  The VAT Law of 2012 aimed to change this and convert the VAT into a modern system with potentially high revenue yield. It should be implemented in its original form as soon as possible.

As a first step, with the exception of tobacco, the maximum rate of taxation should be lowered starting with 30% in FY2021 and 25% in FY2022.  As rates come down, exemptions and tax holidays for FDIs or specific sectors must be eliminated over a well-defined period so that by and large all investors are required to pay taxes. Once the tax rates are lowered and made internationally attractive, exemptions will not be needed.  Capital flight owing to taxation will not be an issue because the investor will have to pay taxes in other countries as well.

The personal income taxation system needs a substantial overhaul. The required reform is to lower the marginal and average tax rates and to increase the tax base through voluntary compliance.  Bangladesh can learn the lessons from the positive experience with income taxation from other countries.  These lessons include:

Most upper middle income and high-income countries (HICs) have a well-established system of fiscal decentralization whereby the property taxes are assigned to local governments as the major source of tax revenues.  For example, HICs raise as much as 1.5% of GDP as property taxes, while UMIC raise 1% of GDP.  In Bangladesh the political decision on fiscal decentralization is yet to happen, although it is imminent as Bangladesh aspires to attain upper middle-income status.  In the interim, the government should design and implement a modern property tax system that is different from the present fragmented two-part system whereby NBR collects a wealth tax as a part of the income tax and local governments collect some nominal taxes on properties. A modern property tax that is based on the true market value of properties and evaluated and updated systematically using a computerized property ownership data base is an essential element of a modern tax system.

There are many country-specific models of a well-designed property tax system that can be researched and implemented in the specific political economy context of Bangladesh. Implementation can proceed in a phased manner with the capital city of Dhaka and then extended to other divisional cities and finally to all urban areas.

Sadiq Ahmed is the Vice Chairman of the Policy Research Institute of Bangladesh. He was previously at the World Bank, serving as country director for Pakistan and Afghanistan and chief economist for the South Asia region. He also led key missions to Egypt, South Asia, and Southeast Asia. He completed his PhD in Economics from Boston University. He has worked on topics of poverty reduction, governance, private sector, trade and macroeconomic. He has authored more than 30 books, policy research papers and articles on various development issues.