The Spectacular Rise of East Asia: What Can Bangladesh Learn?

The Spectacular Rise of East Asia: What Can Bangladesh Learn?

When the history of our times is written, the spectacular rise of East Asia as an economic powerhouse will stand out as a towering landmark1. In the 1950s and 1960s, the economies of East Asia were recovering from the devastation of World War II and were desperately poor. Even as recently as 1990, the developing countries of East Asia (i.e. East Asia excluding Brunei, Japan, Korea, Singapore and Taiwan) had one of the highest poverty rates in the world. Nearly 60% of its people lived below the international poverty line ($1.90 in 2011 Purchasing Power Parity or PPP prices).

What did the region achieve?

From that precarious position in 1990, the region reduced poverty dramatically. Twenty-five years after being one of the poorest regions in the world – that is, by 2015 – developing East Asia’s poverty rate had fallen to about 4%, having lifted nearly 900 million people out of poverty and accounting for more than four fifths of the global poverty decline in this period. In the case of income, in 1990, the first year for which we have comparable data (again in 2011 PPP prices), China and Vietnam’s per capita incomes were both about 13% lower than India’s and 17% higher than Bangladesh’s. In the past 25 years, the picture has changed dramatically: East Asia’s per capita income has grown twice as fast as South Asian per capita incomes and, as a result, per capita income in East Asia is now well more than double that of South Asia. As a recent paper from the Brookings Institute notes, East Asia’s middle-class is now around 1.5 billion strong. They make up half of the global middle class, whereas in 2000 they made up only a fifth. Developing East Asia has emerged as an undisputed global economic powerhouse, accounting for nearly 25% of the world’s gross domestic product (GDP), and 43% of global growth over the past five years. If we include East Asian developed countries, the region is currently contributing a third of world GDP and nearly half of world growth. 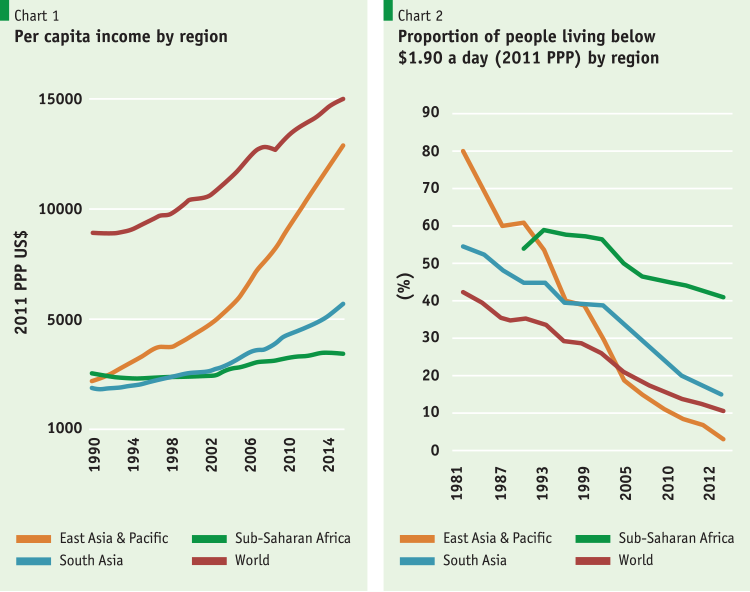 Life expectancy in developing East Asia increased from 45 years at the end of World War II to more than 70 by 1999, a goal that South Asia has not achieved (although Bangladesh has done so). By 1970, there was universal primary school enrolment in East Asia, 30 years before South Asia. By 2000, secondary school enrolment was 60%. Technological progress followed: in 1990, whereas developing East Asian nations supplied less than 3% of the world’s exports of capital goods, this share has now increased 10 times to nearly 30%. Consider Vietnam: 10 years ago, it exported virtually no electrical and machinery goods; last year, it exported more than $77 billion of these products.

Some lessons of ‘the East Asian miracle’

How did East Asia achieve its miracle?

First, East Asia successfully focused on fundamentals. The countries ensured economic stability by running low deficits, which helped keep inflation and interest rates low and exchange rates stable and competitive. They generated adequate revenues. Indonesia, Thailand and Vietnam raised between 13% and 20% of their GDP in tax revenues, compared with 10% in India (central government) and Pakistan and 8% in Bangladesh. On the expenditure side, interest expenses were as small as 3–5% of public spending, whereas in Pakistan and India’s central government, this share sometimes reached 30%. East Asia saved and invested furiously, on average more than 35% of GDP over the past 30 years. Compared with this, investment rates averaged about 25% for South Asian countries, with savings rates even lower.
Second, public investment and public–private partnership played a key role. The East Asian economies (including China and Vietnam from the 1990s) adopted a private sector-led growth model, but one guided firmly by governments. Further, throughout this period, public investment played a critical supporting role. East Asian economies such as China, Japan, Malaysia, Thailand and Vietnam had public investment rates close to or above 10% of their GDP, especially in the 1970s to 1990s – almost twice the average of developing countries. These investments resulted in one of the most impressive build-ups of infrastructure ever seen in the world. By 2000, 90% of East Asians had access to electricity, and per capita energy use in East Asian economies had quadrupled. It is three times higher than in South Asia. Cities proliferated as the urban population increased from 22% in 1981 – the same share as in South Asia then – to 53% by 2015. South Asia lagged far behind, with only a third of the population living in cities. The sheer scale of East Asian urbanisation can be better understood when we consider that the countries’ urban population increased by more than 600 million people over this period.

Third, East Asian economies vigorously embraced globalisation. They did so by becoming highly competitive, exporting to world markets, joining global supply chains and attracting foreign direct investment (FDI) that helped them diversify their economies. Embracing globalisation in turn compelled these economies and their private sectors to become internationally competitive. As recently as the late 1970s, East Asian trade was comparable to that of South Asia. Exports and imports in both regions were about 8–9% of their GDP in 1978. Thirty years later, in 2006, or just before the start of the global financial crisis, the picture had changed completely. East Asian exports accounted for 40% of GDP, while imports accounted for 33% of GDP. In South Asia, the corresponding numbers were 20% and 25%, respectively.
Also critical, East Asian economies not only were integrated with the global economy but also were highly integrated regionally. As much as a quarter of the trade of South-East Asian economies takes place with each other, making it the most trade-integrated region in the world outside the EU. On average over the past 25 years, East Asian developing economies have received nearly 4% of GDP, compared with less than 1% of GDP in the case of South Asia. If we adjust into dollars, roughly speaking East Asia has received six times more FDI than South Asian economies over this period. As is well known, the importance of FDI goes well beyond numbers: it also brings technology know-how and access to foreign markets. Bangladeshis should understand this intuitively. Our ready-made garment industry – the jet engine of our economy – started when Korea invested in a joint venture with the first garment industry in the country, Desh Garments. 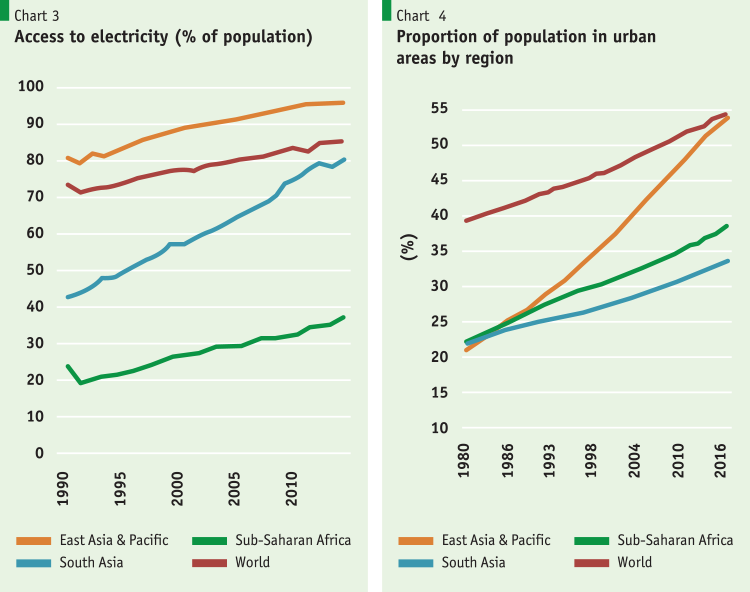 Fourth, East Asian development was inclusive. Although inequality has increased in many of these countries over the past decade, growth was broadly shared if we take the long view. The inclusive pattern of growth in these countries is evident from the dramatic poverty reduction in the region noted above. Many of these economies, including Japan, Korea and Taiwan at the end of World War II and later Cambodia, China and Vietnam carried out sweeping land reforms. Their robust agricultural growth took place on small farms. Not only was food security ensured but also the rising incomes of farmers and farm workers created markets and released labour for other sectors. Governments invested significantly in making the labour force healthy, educated and productive. Per student public expenditure at the primary level in East Asia was, on average, four times higher than that in South Asia; it was even higher than what South Asian countries spent at the secondary level. Between 1990 and 2015, aggregate labour productivity in East Asia grew by five times. Significant real wage growth followed: manufacturing real wages doubled in China between 2000 and 2012 and also rose markedly in countries such as Indonesia and Vietnam.
A striking example of inclusion and the difference with South Asia lies in the role of women. On average, over the past 25 years, more than 60% of working-age women in East Asia have worked, compared with less than 30% in the case of South Asia. Those who have seen the armies of female motorcyclists in cities such as Bangkok, Hanoi and Jakarta will readily understand this. One impact of this is that, all other things being equal, per capita incomes in South Asia could be about 27% higher if women in South Asia worked in the same proportion they do in East Asia.

A striking example of inclusion and the difference with South Asia lies in the role of women. On average, over the past 25 years, more than 60% of working-age women in East Asia have worked, compared with less than 30% in the case of South Asia.

Fifth, these economies were able to use the benefits of their demographic dividend to transform their economies structurally. Dependency ratios (dependent children and elders as a percentage of the working-age population) in the region have fallen by half, from 83 in 1970 to 41 in 2015. But East Asian countries could enjoy the benefits of the demographic dividend only because their economic growth strategy provided workers with productive jobs in new sectors. Labour, land and capital markets worked flexibly to support the mobility of workers and resources towards new industries. The reallocation of labour from less to more productive work accounted for as much as half of labour productivity growth (‘East Asia Pacific at Work’: World Bank 2014), unlike in other regions with more rigid economic structures. Over only 25 years, the proportion of workers in agriculture had dropped from 55% to less than 30%. In South Asia, this shift has been far more gradual, and nearly 45% of workers are still in agriculture. 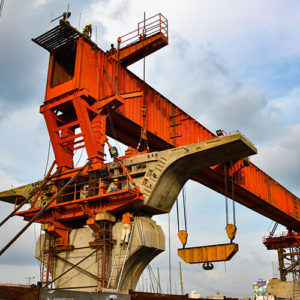 Last, but not least, why were East Asian governments motivated to implement such an ambitious development programme? One answer, which may be surprising, is that fierce political competition prompted the emergence of strong leaders intensely and pragmatically focused on development. Historically, if we leave out the 10 tiny island nations in this region, in almost all of the other countries there was competition from powerful communist insurgencies. In Cambodia, China and Vietnam, the communists took power, making leaders elsewhere aware that if they did not improve the lives of the people they risked overthrow. Within countries, there was also intense competition arising from highly decentralised and powerful subnational governments that spend anywhere between 40% and 80% of public expenditures. There is fierce competition to develop among provinces and counties or prefectures in part because the economic and political fortunes of leaders are tied to the performance of their region. In contrast, subnational governments in Bangladesh and Pakistan, and even in India at the sub-state level, spend less than 10% of public expenditure.
Bangladesh’s history has close similarities to East Asian countries. Bangladesh also emerged from the ashes of war, as a markedly more egalitarian society than India or Pakistan. Independence deepened the land reforms of 1950 and overthrew the Pakistani oligarchy. There was better economic management, higher investment in rural infrastructure, improved human development, including in female participation in education and work, and labour-intensive export-oriented industry. These similarities suggest that the lessons of East Asia may have particular relevance for Bangladesh.

Ahmad Ahsan is a Director at Policy Research Institute of Bangladesh (PRI.) He was formerly Lead Economist of the World Bank, Consultant to the United Nations, New York, Food and Agricultural Organization, the Bangladesh Institute of Development Studies and a Dhaka University faculty member. He holds a PhD from Columbia University. He has publications in the Journals of Comparative Economics, Bangladesh Development Studies, World Bank Research Working paper series, books and as the co-author of the book International Migration and Development in East Asia and the Pacific, World Bank, 2014. He led World Bank teams in policy dialogues and development policy reform and technical assistance operations, regional programs on economic integration and economic policies in Africa, East Asia and South Asia regions.