App-based ride-share services, including Uber, Pathao and the like, are transforming Dhaka’s transport sector. Ride-share operations have emerged mostly in Bangladesh’s capital, although they are expanding. Dhaka has a massive consumer base, rising incomes and an increasing internet penetration rate. It is thus a fertile ground for sharing-economy services to flourish. Among the range of products in the sharing-economy, ride-share services have taken off in the past two years.

In an Uber-Pathao business model, market players do not invest in any physical infrastructure (such as setting up factories or service centres) or traditional assets (such as cars or garages). Unlike conventional companies, they do not have any employees. The drivers are merely participants of an income-generating platform. The future of ride-share services will depend on how much their products cater to the local needs of consumers, taking into account the dynamics of the economy. Internationally, a private car is used only 4% of the time –averaging 50–60 rides a month. The rest of the time, the car stays unused. Ride-share changes this pattern by increasing the car’s usage.

The frustrations of Dhaka consumers with CNG auto-rickshaws are widely known. The fact that ride-share provides a largely seamless door2door service is a blessing to many consumers. However, there is no doubt that Uber-Pathao is a ‘middle-class urban solution’, one that is yet to serve the larger masses. Ride-share services are also not a ‘magic bullet’ to resolves problems related to gridlock in the transport sector in Dhaka city.

San Francisco-based Uber is one of the fastest-growing companies in the world, functioning in over 600 cities. And Uber’s growth in Dhaka has been among the most rapid. What Uber basically presented was a way to take a proven product/technology that worked in the US and to get it up and running in a completely different setup. Uber is not alone in Bangladesh: there are at least eight ride-sharing services in the country’s market. Each of these is trying to carve out its own niche. It is certain that more players, such as Indian giant Ola!, will be joining the market.
Arguably the most successful app-based ride-share service in Bangladesh is the indigenous Pathao. Pathao has been instrumental in spearheading the market along with Uber. It carved out its niche by focusing on motorbike services, launching itself with a catchy musical tagline to Dhaka commuters: ‘Beat the traffic’. It is modelled on similar, and successful, ride-hailing motorbike services in crowded emerging-market cities like Jakarta, Indonesia (Go-Jek), and Kigali, Rwanda (Safe Motos). Pathao has already taken an initial lead by capitalising on these companies’ indigenous know-how. 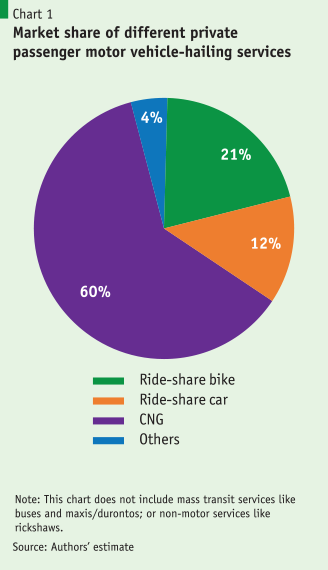 In Bangladesh, there are two operational differences between ride-share bikes (Pathao) and cars (Uber) from the drivers’ end. First, the cars are largely not owned by the drivers, whereas the bikes are. Second, most cars see more frequent usage than their biking counterparts.
The Uber-Pathao model has added a quality alternative in a previously option-stagnated transport arena. Dhaka is a metropolis with 18 million inhabitants. Experts estimate that on a given day there are only 5,000 buses, 40,000 CNG auto-rickshaws and 400,000 rickshaws (although rickshaws provide only trans-nodal services). There are not nearly enough seats to move people around. Therefore, there are plenty of gaps within the transport market for new participants fill the void.

The impact of the ride-share sector

The initial impact of ride-share is telling. The average cost of owning, running and maintaining a car in Bangladesh is estimated to be some Tk. 70,000 per month. This estimate takes into account the cost of insurance, taxes, registration, fuel, a chauffeur’s wage, maintenance and the capital asset cost of buying the car (or a car loan as an alternative option). The capital cost is assumed for a period of five to eight years, after which maintenance costs start rising significantly. According to our estimates, a private car in Dhaka is used for an average of 80 trips per month.
In this account, an average car owner in Dhaka ends up spending around Tk 900/trip, whereas a ride-share car user spends some Tk 300/trip. In other words, a frequent ride-share user ends up saving threefold without losing the comfort of a car experience. A comparatively hassle-free ride-share bike user spends less than Tk 150/trip. Meanwhile, a CNG user spends some Tk 250/trip and enjoys none of the improved services (such as door2door pickup-drop-off) of a ride-share product.
From a car/bike owner/driver’s perspective, Uber-Pathao has brought about tangible positive benefits. A survey by the authors reveals that the gross income of a ride-share car owner is some Tk 60,000 a month. In comparison, a CNG auto-rickshaw owner earns an estimated Tk 45,000 a month. The average monthly income of a Dhaka resident is estimated at around Tk 30,000 a month, which is half of what an Uber car owner can earn.
A recent World Bank study reveals that the average speed in Dhaka is somewhere between 7 and 8 km/hour. An average car moves at some 12 km/hour. In comparison, a bike from a bike-share service like Pathao moves at some 16 km/hour. This means that a person taking Pathao can move significantly faster than people using most other transport facilities.

There is no denying that app-based ride services are bringing some early benefits to the economy. Taking into consideration the average monthly income of different ride-share service providers and the estimated number of vehicles currently involved in the business, we can estimate the size of the ride-share market in Dhaka at some Tk. 2,200 crore a year. It seems the market is going to expand further.
Despite all the hype, though, we should not lose perspective. Ride-share merely takes up a significant share of the larger transport sector. It is so far just a competitor (occupying an estimated 23% of the market) in the private passenger motor vehicle-hailing services subsector – that is, alongside motor services like CNG and rental cars that can be privately hired to get around town. In short, ride-share is in its early stages. The sector has barely made a dent in the larger transport sector.

Taking into consideration the average monthly income of different ride-share service providers and the estimated number of vehicles currently involved in the business, we can estimate the size of the ride-share market in Dhaka at some Tk. 2,200 crore a year.

The existing regulations in Bangladesh do not allow the use of vehicles registered to private individuals for commercial purposes. The government has, however, quickly moved to resolve this problem by introducing its ride-sharing service policy. This will address some of the ambiguities in the system.
There is a need for a business-friendly and consumer-oriented regulatory framework, which should complement plans for the larger transport sector. The policy environment has so far been cordial towards the ride-share subsector –which is dynamic but also nascent, and thus needs policy nurturing. The subsector is also a tech-oriented transformative venture. If information and communication technology connectivity can be accelerated, such tech solutions can be adopted in other sectors also. This will surely boost the country’s ‘Digital Bangladesh’ vision. 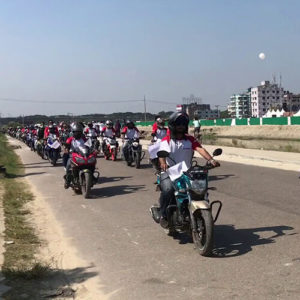 Calling a spade a spade

Bike-share services in Bangladesh must be welcomed with caution. The rising fleet of two-wheelers is a cause for safety concern, with an alarming number of young people (and co-riders) vulnerable to road accidents. Experiences from South-East Asian countries suggest that two-wheelers can be unruly, causing chaos for other commuters and pedestrians. Meanwhile, in the past one year, the bike-share phenomenon has become enormously popular. Meanwhile, the sale of motorbikes in Bangladesh has rocketed, by an unprecedented 44%. These developments indicate that there will be more motorbikes being used at a higher frequency on the roads of Dhaka.
Ride-share services in Bangladesh essentially represent a modified taxi service. Ride-share will truly contribute to improving the traffic burden when the high occupancy vehicle (HOV) approach, or ‘car-pooling’, is introduced. Then there will be more passengers in the same vehicle, and this will reduce the number of cars on the street. HOVs have to be scaled up, otherwise their real impact will be non-transformative. Uber’s product, Uber-Pool, in other countries is contributing marginally to this traffic-reduction equation.
In South America, ride-share services have been real and successful, and this is because of their large-scale use of high-frequency vehicles. These vehicles are pre-booked for monthly use (e.g. to go to the office). Ride-share has been similarly successful in China, where the domestic Didi solution has beaten Uber. Didi is a more innovative app that caters better to local needs. Such are the pure ride-share successes!
With all the essentials taken into consideration, there are few doubts that ride-share is here to stay. Ride-share is already transforming the transport sector, generating positive impacts in terms of creating jobs and expanding choices for consumers. Just like any new development, though, it is also raising legitimate questions pertaining to security and policy imperatives.

Syed Mafiz Kamal is a Senior Analyst at the Centre for Research and Information (CRI), Dhaka. He was formerly a senior researcher at the Policy Research Institute of Bangladesh. Previously, he worked at the UN system in New York in different capacities. He completed his graduate studies in International Relations and Political Economy from New York University. His research interests are in the topics of agroeconomics, political economy and regional integration.

Noor A Ahsan is a senior researcher at the Policy Research Institute of Bangladesh. Prior to joining PRI, he worked as a Data Analyst at BRAC Saajan Exchange Limited, UK. Noor finished his undergraduate studies in Economics from North South University, Bangladesh and completed graduate studies in Applied Economics and Data Analysis from University of Essex, UK. His research interests are in topics of financial economics, econometrics and macroeconomics.