The Garment Worker Diaries (GWD) study collected detailed data on hours worked, factory earnings and workers’ spending, saving habits, borrowing and lending and transfer payments and receipts from 180 workers in four research sites – Dhaka city, Gazipur, Savar and Chittagong – over the course of a year between August 2016 and August 2017. The resulting data suggest that factories routinely violate Bangladesh’s labour laws relating to work hours and wages. About half the time women workers participating in the GWD study worked more than the legally allowed 60 hours per week and routinely were at work for more than 12 hours per day. The data also suggest that, although almost all women received a monthly salary above the legal minimum, this was only because they worked extensive overtime hours for which they were not correctly compensated according to Bangladesh’s labour laws. Specifically, women participating in the GWD study earned, using an hourly rate calculation, below the minimum wage in about half the pay periods covered by the study. In addition, the average worker earned about Tk. 8,500 per month but should have earned about Tk. 10,100 given the amount of overtime they worked.

The GWD used an adapted version of the Financial Diaries (FD) methodology, which captures basic earning, spending, savings, borrowing, lending and cash transfer data from respondents every week over an extended period of time. It employed the core module of the FD methodology but added on a garment worker-specific module that captured data on the amount of time workers spent on different activities, including time at the factory, as well as data on any pain they were experiencing and any injury and/or harassment they had experienced while at work. 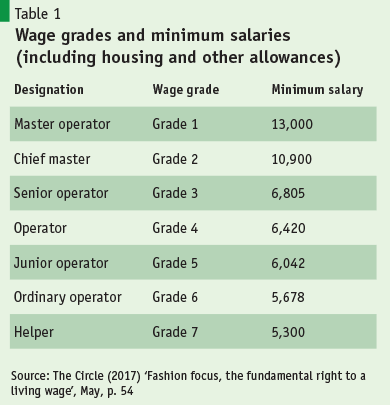 The intent behind implementation of the GWD study was to gain an in-depth understanding of the economic lives of women garment workers. Given this, the GWD methodology was an ideal research methodology. First, the GWD methodology collects in-depth data on workers’ economic lives but over time, allowing researchers to build up a dynamic picture of workers, not just a one-off snapshot. This is especially important in the case of garment workers, who are paid monthly and so must manage their money between paydays to ensure they can cover their basic needs. In addition, the repeated interviews involved in a GWD study (on average about 50 per worker in the case of the Bangladesh study) result in more accurate data, as workers become familiar with the methodology and keep better records. This is a common positive feature of high-frequency panel surveys.

Given the data collected during the GWD study, there is an opportunity to evaluate whether workers who participated in the study are being employed and compensated according to Bangladesh’s own labour laws. Specifically, the analysis that follows evaluates the situation of workers participating in the study against pertinent sections of the Bangladesh Labour Act of 2006.

Paraphrasing Section 102, this Act states that:

Furthermore, Section 105 of the Act stipulates that the maximum ‘spread over’, which is the time spent at work, ‘inclusive of his (sic) interval for rest or meal’, should not exceed 10 hours in a day, making it clear that the maximum of 60 hours per week is inclusive of any break time given to the worker.
The 2006 Labour Act also stipulates minimum salaries for workers of different skill levels working in the ready-made garments (RMG) sector. These amounts have been adjusted periodically to take into account inflation and workers’ demands for better wages. Currently, the minimum salary schedule is as shown in Table 1.
Furthermore, Section 108 specifies that workers receive an overtime rate of twice their ‘ordinary rate of basic wage and dearness allowance and ad-hoc or interim wage, if any’. It is on the basis of these sections of the Bangladesh Labour Act of 2006 that this article assesses the wages and hours worked of women workers who participated in the GWD.

On average, the women participating in our study were at work 60 hours per week, or about 10 hours per day. In almost all cases (90%) they had a break of about an hour. But, as noted above, the law is very clear on the question of what counts towards the legal maximum of 10 hours per day and 60 hours per week: it includes all time at work, including time off for breaks. Given this clear legal standard, the GWD data suggest that, in over half the work weeks covered by the study, workers worked more than 60 hours per week. This varied by research site. In Chittagong only about a quarter of the weeks covered by the study were longer than 60 hours, whereas in the other three research sites it was about 60% of the weeks. Digging deeper into the data, there are a few factories in Chittagong that required very little overtime from their workers and this helped drive down the numbers for that research site. 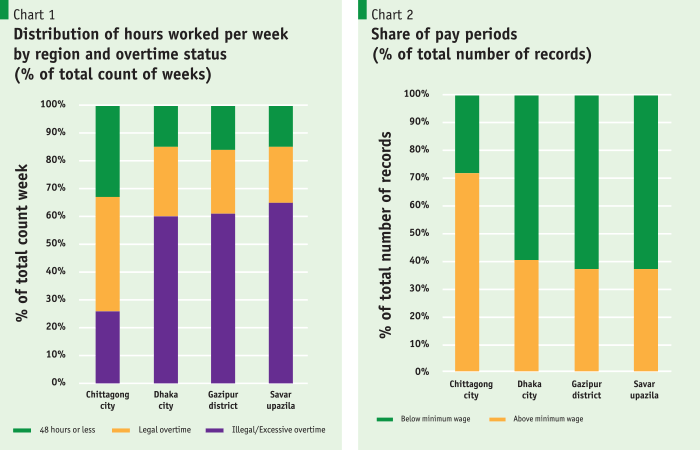 The GWD data strongly suggest that all the workers participating in the study were earning more than their legally mandated minimum salary. We were able to determine this through a comparison of the workers’ monthly salaries with the minimum salary required for each worker’s work designation. But most workers were only able to achieve this minimum salary through many hours of overtime. Once this is taken into account, workers received less than the minimum wage in more than half the pay periods covered by the study, taking into account the fact that they were supposed to be earning double pay for any overtime worked.
As with overtime data, there was a clear difference in the share of pay periods when workers were earning below minimum wages in Chittagong in comparison with the other research sites covered by the study. In the former, 28% of pay periods were below minimum wage; in the latter about 60% were.
It is also worth noting that this is a conservative estimate of the likelihood that workers earned below the minimum wage because it assumes that the workers’ labour contracts stipulate that breaks are unpaid. We do not know if this is the case for sure, and, if we assume all breaks should be paid, then the number of pay periods when workers earned less than the minimum wage jumps to over 60%. 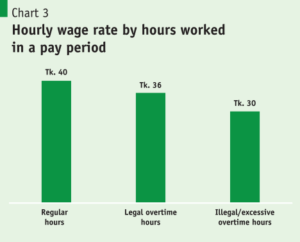 Hourly wage calculation
As previously mentioned, the law states that a typical work week lasts 48 hours, and also that a garment worker should receive a minimum monthly salary according to their role within the factory. This means that a worker has a basic minimum wage of:that follows evaluates the situation of workers participating in the study against pertinent sections of the Bangladesh Labour Act of 2006.

Lastly, the law states that workers should receive an overtime rate of two times their basic minimum wage times their overtime hours:

Using the gross earnings and work hours that participants reported to us, we then used this information to calculate a worker’s hourly wage in the following way:

The data suggest that factories are not complying with Bangladesh’s labour laws. This should be of concern to all stakeholders in the RMG sector, but it will require concerted, effective action by the government to ensure all factories are complying with the law. Absent such action, it will be incumbent on brands that source from these factories to conduct due diligence on their suppliers’ practices to ensure they are, at the very least, complying with the law. But it is clear that brands find it difficult to ensure compliance with a number of standards they would like to impose on their suppliers because there is a lack of transparency in factories’ employment practices. One way to address this is to increase transparency through independent, third-party verification of the hours workers are working and the amount they are being paid. One such effort is about to begin in Bangladesh with the scaling-up of the GWD study to 1,300 workers. We will wait to see what the new data this scaled-up GWD study will produce can do to ensure workers are paid their due. 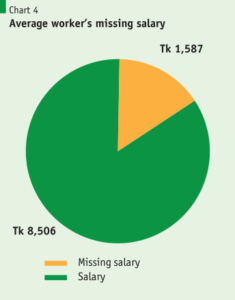 But it should be noted that simply enforcing current laws is not enough. The GWD study was also implemented in Cambodia and India. Workers in Cambodia were paid the most per month in comparison with others, and workers there worked, on average, just under 48 hours per week. A Bangladeshi worker would need to earn at the highest grade of Tk. 13,000 per month for 60 hours per week and receive her mandated double pay for overtime, to earn the same amount that the average Cambodian worker earns working less than 48 hours per week. And this is before the latest raise in the Cambodian workers’ wage, which took effect in January 2018, and taking into account differences in the cost of living across the two countries. This is something that the Minimum Wages Board, which is due to meet some time this year, should keep in mind as it determines the new wage schedule for the RMG sector.

Guy Stuart is executive director of Microfinance Opportunities (MFO). Prior to this, Stuart was a senior advisor to MFO and served as principal investigator on five Financial Diaries studies and as project leader for the development of the Financial Capabilities Index Web Portal. He received his Ph.D. from the University of Chicago in 1994, and subsequently worked in the field of community economic development. He worked as a lecturer in public policy at Harvard Kennedy School where he taught courses in management and microfinance. He continues to teach at the school, and is a fellow at the Ash Center.