On January 30, 2019 the Bangladesh Bank (BB) announced its Monetary Policy Statement (MPS) for the second half of FY2019. The statement reflects the Central Bank’s commitment to coordinate its policies in line with the government’s agenda for sustaining real economic growth with continued macroeconomic stability. In addition to standard commitment for maintaining price stability, the MPS also aimed to create jobs for the growing young population by supporting micro, small and medium enterprises (MSMEs) which operate in stable macroeconomic environment with greater access to bank financing.
Taking into consideration lessons from other developing and emerging markets and its own convictions, BB has made a number of statements in the MPS, such as: (i) allowing the rate of interest to be determined by the market forces of demand and supply; (ii) allowing the exchange rate of the US Dollar to the Bangladeshi Taka to be determined by the market forces of demand and supply; (iii) keeping the rate of interest to a level which is tolerable; and (iv) create conditions for private sector credit growth to expand by 16.5% in FY2019. These statements are consistent with sound financial management in support of the government’s growth objectives. The objective of this article is to evaluate these statements made in the MPS taking into consideration the ground reality and the challenges which BB will continue to face in the coming months on the domestic and external fronts.
There are tensions in the domestic money market in terms of tightening liquidity in the banking system and supply of foreign exchange in the interbank foreign exchange market is also getting tighter due to continued weakness of the balance of payments (BoP) in recent years. The external current account balance (CAB) has improved somewhat in FY2019 compared with the last year, but it is still registering large deficits every month and BB’s gross official reserves have continued to decline in nominal terms at a moderate pace. According to revised BB figures, the CAB in FY2018 was an all-time-record deficit of $9.78 billion. The condition got slightly better in the provisional figures for the CAB in the early months of FY2019, although it still recorded a deficit of $4.3 billion in the seven months of FY2019.

The external current account balance (CAB) has improved somewhat in FY2019 compared with the last year, but it is still registering large deficits every month and BB’s gross official reserves have continued to decline in nominal terms at a moderate pace.

The weakening of the BoP has contributed to exchange market instability. During FY2019 (so far), the exchange rate of Bangladesh Taka vis-à-vis the US Dollar has depreciated from a high of Tk. 83.11 per $1.0 to a low of Tk. 85.31. BB had been trying to stabilise the exchange rate by intervening in the foreign currency market by selling $1.3 billion till January 27, 2019. However, it is not possible to intervene indefinitely. 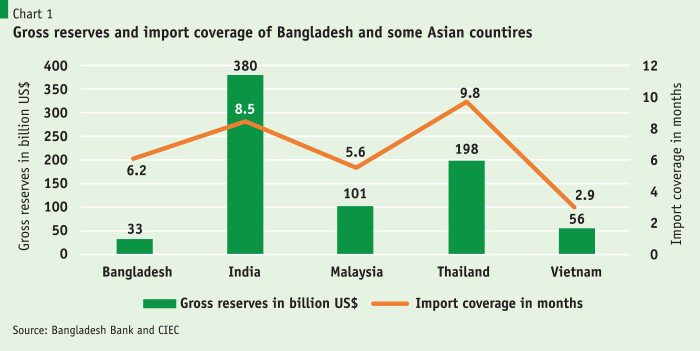 Moreover, some banks are refusing to open LCs on behalf of their clients due to shortage of foreign exchange in the interbank market at the BB dictated rates. In the last four years, the gross official reserve did not increase in dollar terms whereas there has been a significant increase in imports. Thus, the reserve coverage for import payments has fallen significantly and likely to fall further. At six months of reserve coverage, the level of reserves is still comfortable and compares well relative to its comparators (Chart 1). However, since it declined by two months (from eight months to six months within a period of 15 months, Chart 2) and this kind of rapid fall cannot continue for long, market-based flexible exchange rate management is the way forward. 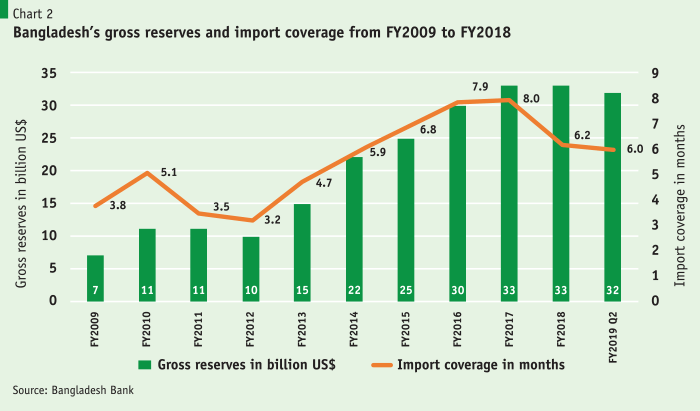 There is obviously a wide gap between what BB has stated in the MPS with regard to exchange market operations, and what it is still practicing. Since the statement in the MPS with regard to market-based exchange rate determination is widely supported, an actual change in BB’s exchange rate policy at the operational level is expected, particularly after the national elections. But that is yet to take place. Such a move would certainly lead to a further depreciation of Taka against the US dollar, but that would be in line with the appreciation of the dollar against all major currencies in the global exchange market. This kind of adjustment would also help boost exports and contain pressures for excessive growth in imports, thereby helping restore BoP equilibrium and a resumption in building up of BB’s foreign exchange reserves. Bangladesh needs to increase or at least maintain its reserve coverage (in months of imports) at the current level and also increase liquidity in the money market. But these objectives can only materialise if the level of gross official reserves increase steadily along with growth in import payments.
BB’s credit and Interest rate policies should not be viewed independently from the ongoing tightening of liquidity in the banking system. This liquidity problem has pushed up the interest rate structure of the banks in 2018, and this did not happen overnight.

The problem over liquidity in the banking system has been intensifying over the last several years due to a number of factors:

Against this background, the deposit growth rate in the banking system slowed down from a healthy rate of about 20% to less than 10% in FY2019 (Chart 4). Banks started to compete for funds, and they had no option but to offer rates to depositors which were close to the NSD’s rates, leading to a sharp increase in deposit rates across the whole banking system. Given the average spread in lending and deposit rates of about 4.5%, the lending rate also increased significantly.

…in its own projection BB is stating that the NFA will be negative in the 2nd half of FY2019 which is not at all conducive to the monetary management point of view.

Given the slower deposit growth, banks were also not able to expand private sector credit as per the MPS of BB. Last year, the target was 16% but the achievement was 13%. As the deposit growth is still subdued or even decelerating further, the banks’ ability to expand credit has been correspondingly limited. 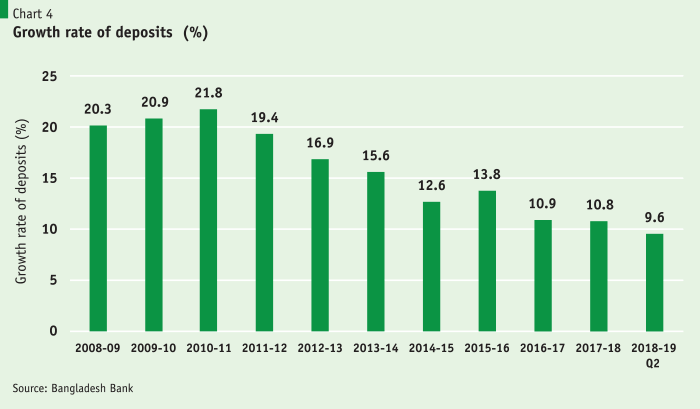 What can BB do in this situation? It must address the fundamentals- not superficially but at the core issues- which contributed to the decline in liquidity. For that to happen BB should work on all three fronts listed below:

Bangladesh has a history of high interest rates compared to its comparator countries (Table 2).
This makes our economy inherently less competitive. We need to understand what makes our interest rates high.

Addressing this problem of high spread will require:

BB is right in stating its desire to maintain market-based interest rates in its MPS. The statement is essentially reassuring because we consider it as moving away from the earlier stated policy of fixing the maximum interest rates at 6% and 9% for deposit and lending, respectively. However, for market-based interest rates to come down to a level which will make Bangladesh more competitive and support investment and growth objectives will require much deeper level of policy undertakings along the lines described above.

Banks cannot expand lending without a commensurate growth in deposit base while adhering to macroprudential requirements of BB. If the current anaemic deposit growth rate is sustained because of the factors discussed above, there is no way that private sector credit will expand by 16.5% as envisaged in the MPS in support of the government’s growth target. Another complicating factor is also emerging. Until FY2019, because of much larger (well above the budget targets) borrowing through issuance of NSD instruments, government borrowings (net) from the banking system were negative indicating that the government was repaying the banking system on a net basis. However, this situation has changed and despite continued heavy borrowing from the NSD, the government is also borrowing heavily from the banking system in FY2019.

The growing recourse to bank financing by the government- despite another record level of borrowing through NSD instruments- is attributable to the very weak revenue performance of the National Board of Revenue (NBR).

This unfavourable turnaround in government borrowing is a matter of concern. The growing recourse to bank financing by the government- despite another record level of borrowing through NSD instruments- is attributable to the very weak revenue performance of the National Board of Revenue (NBR). In the first seven months (July-January) of FY2019, the NBR’s tax revenue only increased by less than 7% compared with a target of 43%. This huge shortfall in projected revenue is likely to cause crowding out of loanable funds of the banking system by the government to finance budgetary outlays. In this situation, credit expansion to the private sector is likely to be much more limited than in recent years. Such an outcome—which is currently in the making—will not be conducive to sustaining real economic growth at above 8% rate.

The statements/commitments made in the MPS regarding the four points stated above are to be fully supported. The challenging money market and the difficult BoP situation will require BB to work on multiple fronts to ease liquidity in both money and exchange markets and create the environment for bringing down the interest rate structure in a sustained manner. It is now important that BB adopts defined action programs outlined above in support of the positive statements made in the MPS.

Ahsan H. Mansur is the Executive Director of the Policy Research Institute of Bangladesh. In his long career, he served the International Monetary Fund (IMF), working in important functional departments (Fiscal Affairs and Policy Review and Development departments) and area departments (Middle East and Central Asia and Asian departments) of the IMF. He also served as the IMF Senior Resident Representative to Pakistan during 1998-01 and as the Fiscal Advisor to the Minister of Finance, Government of Bangladesh (1989-91). He completed his PhD in Economics from University of Western Ontario. He has published extensively in various prestigious journals (including Econometrica, Journal of Economic Theory, and IMF Staff Papers), edited books on special economic topics and in the IMF Occasional Paper and Working Paper series.