By  Mohammad A. Razzaque, Jillur Rahman

Social protection aims to reduce poverty and vulnerability, and to help individuals or households cope with crises and shocks. This helps poor and vulnerable households build their resilience while enabling them to invest in health and education of their children, amongst others. Bangladesh has a long history of social safety net programmes with the relevant support system evolving given the socio-economic progress being made. The government has formulated a comprehensive National Social Security Strategy (NSSS), the implementation of which is currently underway. Building on the past experience, the NSSS seeks to streamline and strengthen the existing social protection system with the objective of achieving better results from the resources used. However, like elsewhere, the social security system in the country is characterised by high targeting errors which in turn lead to inefficiency and low programme impact.

Bangladesh spends about 2% of its GDP on social security, comprising over 100 programmes. Apart from a few, most of these schemes are small. According to the Household Income and Expenditure Survey (HIES) 2016, 27.8% of households, accounting for 28.7% of the total population, are covered under at least one social security programme (SSP) (Chart 1). 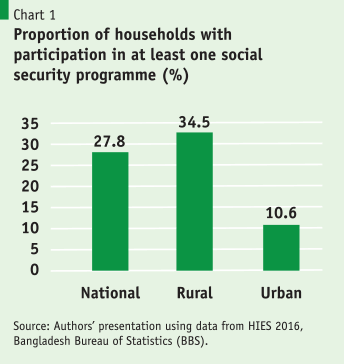 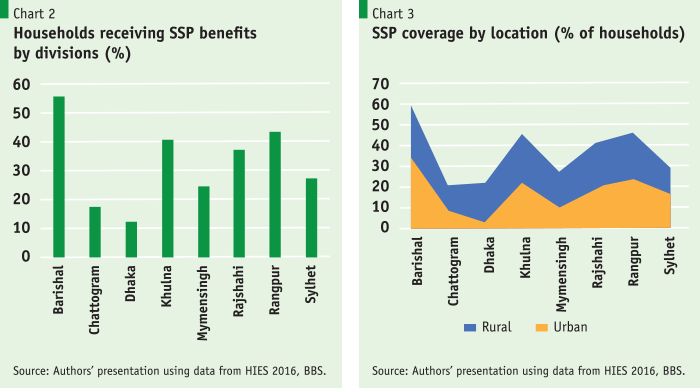 It is generally recognised that Bangladesh’s social security programmes are characterised by high targeting errors in beneficiary selection. There are both exclusion and inclusion errors. When households/individuals eligible for social security benefits are not covered in the relevant programmes, it results in exclusion errors. Inclusion errors arise when non-eligible individuals are admitted to SSPs. In estimating the magnitude of selection problems, different measures are used, causing confusion. For example, in some cases, the errors are expressed as proportion to the total population. Since the total population is not the target of SSPs, this expression of exclusion error can shrivel the severity of the problem. On the other hand, the proportion of non-eligible recipients as percent of the total non-eligible population may not be of policy interest for the similar reason of their not comprising the target population in the first instance. Therefore, perhaps the most pertinent definitions from policymakers’ perspective should be: exclusion error – the number of eligible people not covered in SSPs as proportion to the number of eligible individuals (this can also be considered as coverage inefficiency); and inclusion error – the number of ineligible recipients as proportion to total programme recipients (this can also be regarded as targeting inefficiency). Under these definitions, the inclusion error can be directly considered as the opportunity cost of targeting inefficiency, i.e. keeping the overall programme budget unchanged, how many more eligible people could be brought under SSP coverage.

When households/individuals eligible for social security benefits are not covered in the relevant programmes, it results in exclusion errors. Inclusion errors arise when non-eligible individuals are admitted to SSPs.

While each programme has its own selection criteria, one general principle is that all poor and vulnerable households should be in the target group for social security support. The NSSS defines vulnerable population as those who are non-poor but have per capita income less than 1.25 times the poverty line income. Keeping aside the programme-specific selection criteria to consider poor and vulnerable households as the target population and utilising the coverage and target inefficiency definitions above, the exclusion error estimated from the HIES 2016 is a staggering 71%. That is, as high as almost three-quarters of poor and vulnerable households remain outside of SSP coverage. The inclusion error on the other hand is estimated to be 46.5% (Chart 4). That is, close to half of all programme participants are actually ineligible and if there were no targeting inefficiency, the number of eligible recipients could almost double even without increasing the social protection budget. 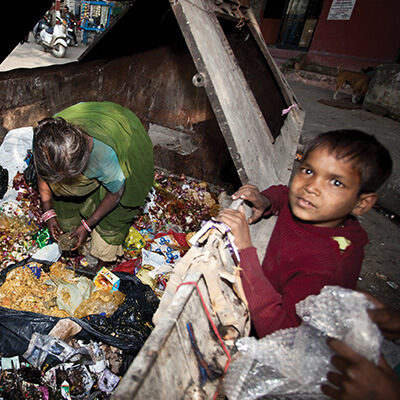 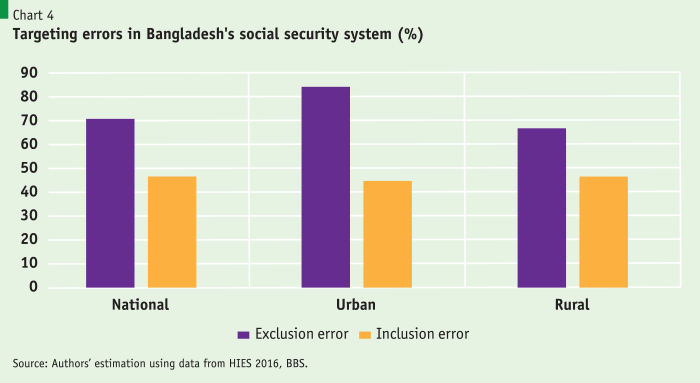 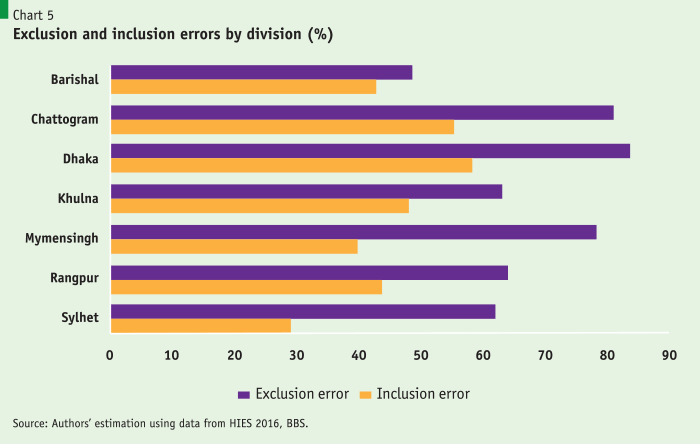 As mentioned above, each social safety net programme has its own selection criteria such as age, sex, marital status, land ownership, individual/household income, the state of recipients physical and mental health, etc. It is quite possible that when these specific selection yardsticks are considered, the targeting errors could be different. Assessing exclusion errors utilising this elaborate measure is quite data-demanding as most programmes consider multiple factors in targeting beneficiaries. On the other hand, often the inclusion error is more important for the policymakers to achieve better or effective utilisation of resources. In fact, most studies that deal with programme-specific criteria has focused on the inclusion error or targeting inefficiency. 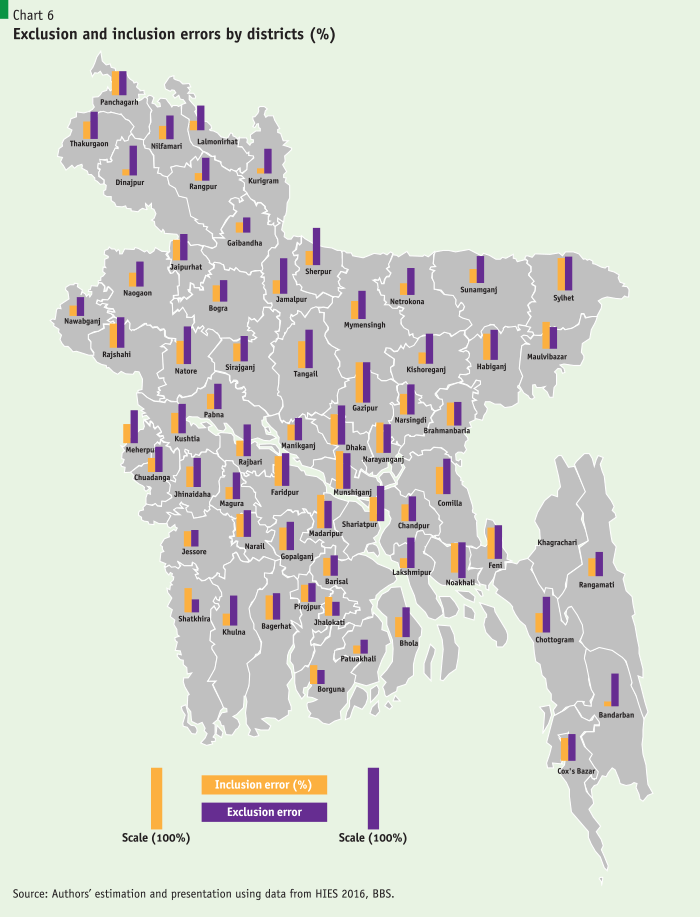 The programme-specific errors should ideally be computed from the BBS HIES data. However, the latest HIES data are only partially accessible and not all the related information on the eligibility criteria is available. One alternative is to make use of the Bangladesh Integrated Household Survey (BIHS) 2015 data due to the International Food Policy Research Institute (IFPRI). It should be pointed out that the BIHS survey is nationally representative for the rural Bangladesh only and does not cover urban areas. 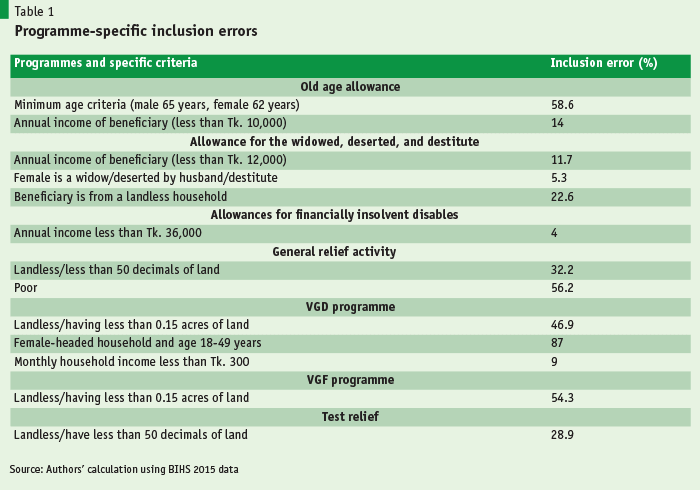 For Old-age Allowance programme, the inclusion error estimated from the BIHS database is 58.6% for the minimum age criterion (male 65 years, female 62 years), and 14% for income criterion of less than Tk. 10,000 per month Turning to the Allowance for the Widowed, Deserted, and Destitute Women, the inclusion error is estimated at 11.7% when considering the income criterion alone. But if the landlessness is used for determining eligibility, the error will rise to 22.6%. About 5% of the beneficiaries are not widowed, deserted, and destitute women. Using the income criterion, the inclusion error for the Allowances for Financially Insolvent Disables is found to be a minimum of just 4%. When the criterion of landlessness (less than 0.15 acres of land) is used, the estimated error is 47% for Vulnerable Group Development (VGD) programme and 54% for Vulnerable Group Feeding (VGF) programme. As high as 87% of VGD programme beneficiaries are either from male-headed households (although the programme is designed for female-headed households) or do not satisfy the age criterion (18-49 years). About one-third of the General Relief and Test Relief beneficiaries do not satisfy the income criterion. This however does not necessarily imply that these households are non-eligible as the most important criterion of relief support is the household’s being affected by natural disasters. The Primary School Stipend Programme has become universal, and therefore, the criteria of poor and vulnerability and landlessness are not applicable. Rather, eligibility depends on children’s school attendance.

The poverty impact of the inclusion error: a simulation analysis using household data

Social security programmes are considered as safeguards against poverty and vulnerability. However, the poverty impact of these schemes is low for two reasons: a) high inclusion error – a large portion of SSP beneficiaries, as shown above, is selected wrongly, providing benefits to non-poor and non-vulnerable population groups; and b) the transfer amount is very low relative to the need of the poor and vulnerable households. Besides, the indirect impact of such programmes is difficult to measure. Notwithstanding, it is possible to simulate the potential poverty impact if the inclusion error could be eliminated to expand the coverage of eligible people. The relevant simulation exercise is undertaken using the HIES 2016 data under two alternative scenarios: i) as the inclusion error is eliminated, the saved resources (programme benefits) are distributed among the households below the poverty line in a manner that would be just enough to make them non-poor; and ii) the saved resources are distributed amongst the households nearest the poverty line by an equal amount of Tk. 500 each. Given the designs, the impact on poverty should be the biggest under the first scenario. The second scenario can, however, be operationally more realistic as a specific amount of transfer to each household is more practical than varying the amount by individual households’ poverty gap status. While there can be many other options for distribution, the above two scenarios are considered for pedagogical purposes.

Social security programmes are considered as safeguards against poverty and vulnerability. However, the poverty impact of these schemes is low for two reasons…

It is found that if resources were distributed with the objective of maximising poverty impact, the headcount poverty would decline to 17.7% against the current rate of 24.3% (Chart 7). 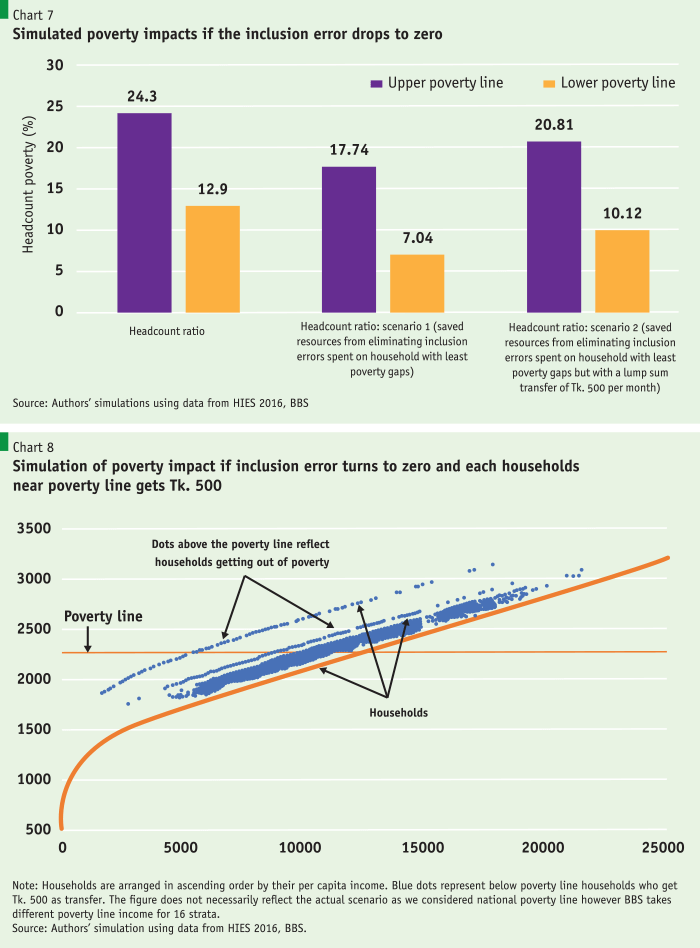 If only the households below the lower poverty line income are targeted, a maximum of 4.5 million people will graduate from extreme poverty (i.e. the extreme poverty incidence will decline by 2.8 percentage points).

The government of Bangladesh aims to establish a comprehensive social security system with a special emphasis on the poor and marginalised population groups. This has been reflected in the National Social Security Strategy. The high targeting errors in the existing system are clearly an obstacle and will make it much costlier for social security programmes to achieve this goal. Therefore, the importance of dealing with the targeting errors cannot be overemphasised.
Given the objective of reducing the targeting errors, the NSSS suggests, amongst others, developing a single registry management information system (MIS) for all programme participants, establishing proxy mean test (PMT) scores using a National Household Database (NHD) for selecting potential beneficiaries, and setting up a proper grievance redressing mechanism. An effective implementation of these recommendations in a timely manner is thus critical for lowering coverage and targeting inefficiencies.
It is true that benefits arising from SSPs are small. Nevertheless, as shown above, the opportunity costs associated with the inclusion error (i.e. due to non-eligible programme participants) are very high in terms of the foregone impact on poverty. Expanding the programme coverage and increasing the benefit size will have a much greater impact when inclusion errors are effectively tackled.