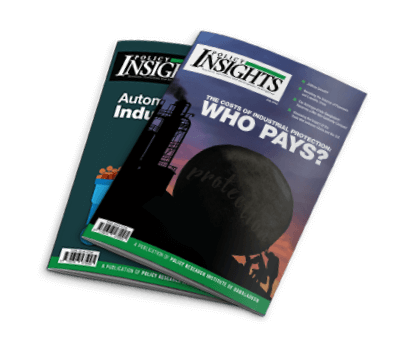 2021 marks the 50th anniversary of Bangladesh’s independence and was a milestone in more ways than one. Today, Bangladesh is no longer remembered as an impoverished and resource-poor nation subjected to frequent natural calamities. Rather, it is hailed by international analysts for its economic progress as a dynamic exporting economy, its successful fight in reducing abject poverty of millions and making significant strides in several aspects of human development. As the year draws to its end, this issue of Policy Insights includes the annual State of the Economy document which gives a thorough review of Bangladesh’s economy and its performance on multiple fronts with the global economy still reeling from the effects of the pandemic. The recovery path can bring forth new challenges that will require a careful review of existing macro, trade and investment related policies, among others.

Invoking the strong nexus of FDI-FTA-GVCs to leverage the world market for sustained rapid growth, Vietnam has demonstrated an aggressive form of export-led growth based on the belief that its future prosperity towards high-income status depends on maintaining superior export performance.  An article in this issue delves into the history and subsequent pathway undertaken by Vietnam which Bangladesh can take lessons from in its own journey to prosperity.

International experience with micro and small enterprises (MSEs) suggests that the sector can be an important driver of employment, investment, exports and economic growth. Evidence from Bangladesh shows that MSEs are an important source of non-farm employment and have played a key role in poverty reduction. An article in this issue identifies the overarching financial constraints that limit the potential of MSEs, suggesting ways to promote innovative financing solutions. With the right policy support for financing taking best practices into consideration, the sector can bring forth much needed job-led growth.

As Bangladesh celebrates its 50th year as a sovereign nation, Zaidi Sattar, pens an article which documents the journey of Bangladesh’s trade policy towards liberalization and rationalization, side by side with the developments in international trade policy and politics in that time. Bangladesh has the potential to consistently grow at rates higher than seven percent. But opportunities opening up in the global marketplace of the 21st century must be seized through aggressive trade and supportive economic reforms, if Bangladesh is to live up to the reputation of resilience and dynamism and defy the geopolitical doomsayers once and for all.

In this issue of Policy Insights, another article deliberates over the strengths and shortcomings of the FY 22 budget. A comparative look at other countries and regions reveals Bangladesh’s current revenue shortfalls. Several amendments to the tax policy are suggested, including the overly-complex value added tax introduced in FY 19. Additionally, the tax administration system also needs to be looked at to be at par with the developed nations. The progress made by the Ministry of Land in digitizing land records and transaction – a surmounting task anywhere – shows promise and can inspire reforms and automation in taxation with strong political and administrative leadership.