Any budget is not a one-off policy document. For Bangladesh, the FY2023 Budget is the culmination of 50-plus years of addressing formidable development challenges with grit to make the country a success story of development. In discussing the budget, it is important to put it in a historical context as budgets are key development instruments.

Bangladesh began its journey in 1972 with a per capita income of under USD 100, in the company of Chad, Rwanda, Burundi, and Nepal. Its Gross Domestic Product (GDP) was only USD 7 billion with some 75% of the population or 70 million known to be living in poverty.

Five decades later, by the close of the fiscal year 2023 (FY23), we expect Bangladesh’s GDP to cross half a trillion US dollars with per capita income more than 28 times what it was in 1972. The march to Least Developed Country (LDC) graduation in 2026 remains intact despite the onslaught of the Covid-19 pandemic and the impacts of the Russia-Ukraine War.

For all their shortcomings, annual budgets such as the FY23 Budget, have singularly contributed to the sustained economic progress for over 50 years. Built on the strong macroeconomic foundations of the past 30 years, three five-year Plans (6th, 7th and 8th) and two Perspective Plans (2021 and 2041) have laid down the road map for rapid inclusive growth building on the notable achievements, particularly in the past decade. 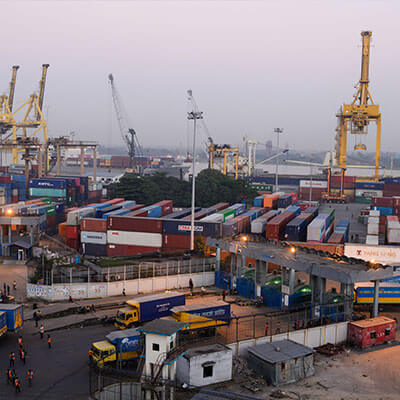 Bangladesh is a development case study for researchers and academics in leading universities around the world not just for its success in being a leading apparel exporter but also for its progress in social and human development.

Every decade, average GDP growth has been rising by at least one percentage point. Per capita GDP growth reached 7% in FY2019. The economic history of the past 100 years shows that more than half the countries experience a decline in incomes in one decade or the other. Not Bangladesh. Leading economists are surprised by how quickly Bangladesh has grown in a short period. Sound macroeconomic management for a quarter century has laid the foundations for stable and sustained growth.

Poverty has been declining at a steady pace also. Today, only 20% of the population is regarded as poor, and only 10% as extremely poor.

These are the broad indicators of economic progress, complemented with human development indicators: decline in child and maternal mortality, rise in longevity, gender balance in education, female labour force participation, and so on.

Progress in human development was acclaimed by none other than Nobel Laureate economist, Amartya Sen, who has his roots in this part of the world. Pulitzer-prize-winning columnist of the New York Times, Nicholas Kristof, went so far as to suggest that President Joe Biden draw lessons from Bangladesh on how to reduce poverty in the United States of America (USA).

So, any budget must be seen in the light of these long-term developments. The FY2023 Budget is framed with this central focus: ‘Bangladesh’s challenges in the next fiscal year and the strategy to address them’.

This budget should also be seen as part of the long-term vista of Bangladesh’s development. The macroeconomic and fiscal framework presented reflects a continuum of prudent macroeconomic management that is the foundation of stability and growth despite the external challenges from global developments.

This budget should also be seen as part of the long-term vista of Bangladesh’s development. The macroeconomic and fiscal framework presented reflects a continuum of prudent macroeconomic management that is the foundation of stability and growth despite the external challenges from global developments.

In the FY23 Budget, a number of challenging issues have been addressed. Four critical economic challenges, however, required more attention. These are (a) Inflation, which is mostly imported inflation; (b) Debt and deficits with a reference to sustainability issues; (c) Potential instability in Balance of Payments (BOP) despite strong export growth; (d) Persistence of high protection and constraints to export diversification.

The current inflation problem is externally driven. The poor are hurting and the inflation monster must be tamed. Monetary management will not be enough to sort this out. With nearly 8% depreciation over the past month, this presents an excellent opportunity to cut tariffs without under-cutting protection or revenue – the two main stumbling blocks. This is the time to tame inflation with tariff cuts. The budget proposal has missed this opportunity. Could something be done before Parliament approves the Budget?

Despite the well-known low tax-GDP ratio Bangladesh’s prudent macroeconomic management, which continues with the proposed budget, is characterised by sustainable fiscal deficits of around 5% of GDP, financed (as in most past budgets) 60% by domestic resources and 40% with external aid.

Deficits generate public debt. But deficits are necessary to finance investment in social and physical infrastructure for development. However, these sustainable fiscal deficits have led to sustainable public debt – domestic as well as external.

IMF-WB Debt Sustainability Analysis, reported in April 2022, gave Bangladesh a clean bill of health. But the Sri Lanka debacle should keep our policymakers on their toes to stay clear of a Lanka episode in the future.

The FY2023 Budget signals the end of pandemic management and focuses on economic recovery which remains strong with robust exports (35% plus growth) and imports (45% plus) expected to continue for the coming fiscal year.

Exports finally reached the USD 50 billion milestone but the import surge has put pressure on the BOP causing the exchange rate to depreciate by nearly 8%. This is expected to boost exports and restrain imports in the coming year.

It’s a good thing that BB finally decided to bite the bullet and let the exchange rate be flexible. This measure will prevent the loss of foreign exchange reserves. The current account deficit (CAD) is still projected to be under 3% of GDP, which is a sustainable figure, particularly in light of current account surpluses experienced in the majority of years during the past two decades.

CAD is also a reflection of the excess of investment over national savings – which is a good thing for the rapidly growing economy making a massive investment in 21st-century infrastructure with mega projects (e.g. Padma Bridge, Karnafuli Tunnel) that will shortly propel the economy’s growth rate.

But tariff adjustments in the budget  reveal persistent protection that could have been scaled back at a time when customs revenue is surging on the back of import surge in addition to significant depreciation – both contributing to customs revenue windfall. Preliminary estimates show a modest rise in the average nominal rate of protection (NPR) in 2023 (Table 1-2). 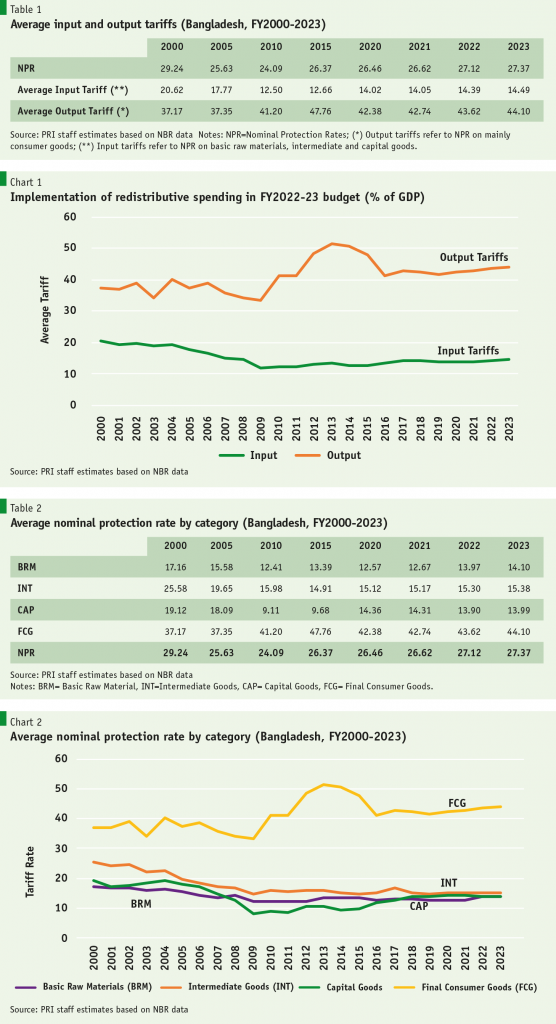 Adverse recent global trends presented a golden opportunity for tariff rationalisation. But the opportunity appears to have been missed. The interlinkages between the two strategies – export diversification and tariff rationalisation – ought to have been recognised. Sadly, a persistent high protection policy has won putting a damper on export diversification prospects.

Adverse recent global trends presented a golden opportunity for tariff rationalisation. But the opportunity appears to have been missed. The interlinkages between the two strategies – export diversification and tariff rationalisation – ought to have been recognised. Sadly, a persistent high protection policy has won putting a damper on export diversification prospects.

Tariff rationalisation is an issue waiting to be addressed and resolved, now more than ever. It is not just that we need to prepare for LDC graduation in 2026. Properly done, it is the most effective instrument for lowering domestic prices of consumer goods as well as eliminating the unique Bangladeshi situation of anti-export bias of trade policies that are preventing export diversification.

In the past year, two high-level committees in the Ministry of Commerce and the National Board of Revenue (NBR) have been diligently working on the issue of tariff rationalisation. We are eager to know what the outcome was.

A slew of industrial products (e.g. motorcycles above 250 cc) have been identified for “infant industry” protection, as many of these are new and rising industries. Good idea. But using supplementary duty (SD) for protection might not be a good idea under the WTO rules-based system.

Moreover, such protection should have been made time-bound and performance-based. Monitoring performance annually should be part of the strategy going forward. Otherwise, we will again be burdened with a host of ‘geriatric infants’.

Economic history tells us that protection once introduced becomes deeply entrenched in the system and is difficult to dislodge. Consumers end up bearing the burden of the protection tax while it also discourages exports.

Nevertheless, it is fair to say that this Budget, like 50 of its predecessors, is one more step on the ladder of economic progress – a step closer to graduating out of LDC status in 2026 and achieving Bangladesh’s goal of becoming an Upper Middle Income Country (UMIC) in another decade or so.