Economic Impact of Water Use Efficiency Improvements in South Asia

Economic Impact of Water Use Efficiency Improvements in South Asia

It is widely perceived that the South Asian economies could face a major water crisis in the coming decades. Population growth coupled with rapid economic expansion will significantly raise demand for water, particularly in irrigation, where water use efficiency (WUE) is very low. There is much greater scope for irrigation efficiency: studies have found that potential gains from WUE would be much higher for South Asia than for the South-East Asian region.
The share of agriculture in gross domestic product (GDP) of South Asian countries is relatively large (15% in Bangladesh, 19% in India, 32% in Nepal, 12% in Pakistan, 21% in Sri Lanka). Crop production in these countries relies heavily on irrigation, with the gap between actual and potential crop yields quite high. Any yield improvement could help use of water and land resources more efficiently by increasing the ‘crop per drop’ of water.
There are two ways to increase WUE in irrigation: 1) improvements in the delivery of irrigation water to the crop and 2) improvements in the utilisation of water by the plant. The gap between irrigated and rain-fed crop yields helps explain the variations in the regional impacts of WUE on crop outputs. The gain in crop production depends on the difference between the irrigated and rain-fed crop yields. If the difference is large, crop production can grow significantly. This article summarises the findings of an academic paper published in the Journal of Environmental Protection, by Farzad Taheripour, Thomas Hertel, Badri Narayanan, Sebnem Sahin, Anil Markandya and Bijon Kumer Mitra in 2016, titled ‘Economic and land use impact of improving water use efficiency in irrigation in South Asia’.

Analysing the impact of improved water use efficiency

Using an advanced computable general equilibrium (CGE) model linked to biophysical data on land and water resources, the abovementioned paper aims to find out the impact of improvements in WUE. The analytical framework used in the paper is an extension of the Global Trade Analysis Project (GTAP) Environment model (known as GTAP-E), which allows substitution among energy inputs. Water conservation in the model can be achieved via the substitution of labour, capital and energy for water consumption as well as by introducing an exogenous shock in WUE. It assumes energy and capital are substitutable inputs in economic activities, except for primary energy sectors such as gas, coal and oil.
In a series of modifications, land by agro-ecological zone (AEZ), biofuels and biofuels by-products were introduced in this model to make it suitable for studying the economic and environmental impacts of biofuel production and policies. The new model has been labelled GTAP-BIO and is widely used to examine the consequences of biofuel production at the global scale. More recently, it has been modified to track supplies of, and demand for, land and water resources within a country at a spatial resolution of a river basin by AEZ level at the global scale and to take into account competition for water across its alternative uses. The model developed as a result of this set of modifications is nicknamed GTAP-BIO-W. This allows for an examination of the extent to which enhanced WUE can increase food production in South Asia, and how it alters demand for irrigated land and affects land use. By studying several alternative scenarios to cover a wide range of WUE rates in irrigation, it is possible to offer insights into the relative costs and benefits of improved water efficiency in South Asia. 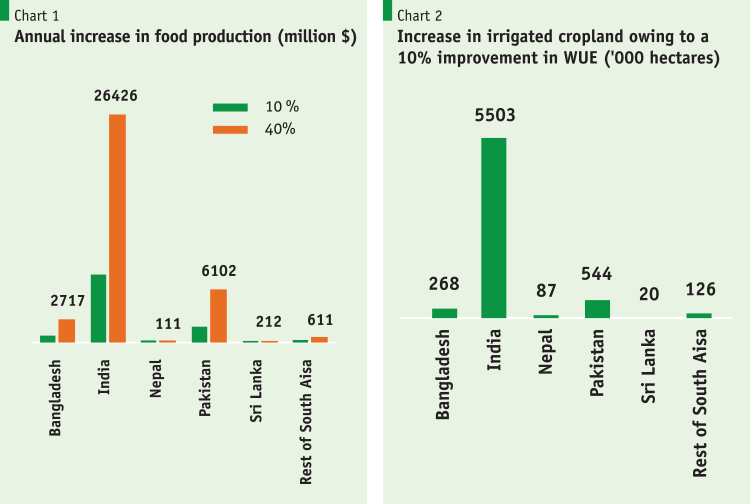 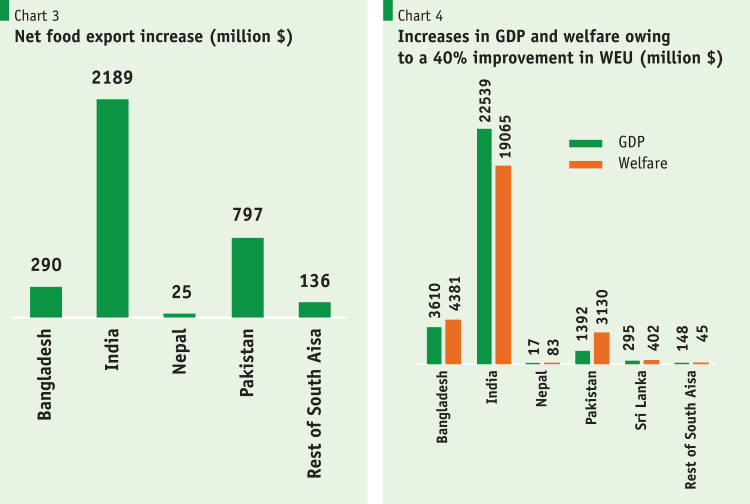 The positive impacts of improvements in WUE on food production plus its potential to lower food prices would jointly contribute to improving food security in South Asia. Policy-makers dealing with the agriculture sector and irrigation are aware of the benefits of improvements in WUE. What they have thus far lacked are quantitative estimates of the broader benefits to the economy as a whole from such improvements. This gap in knowledge is now being addressed in recent studies utilising advanced and state-of-the-art empirical techniques. However, there are questions as to how to finance improvements in WUE, given the limited public resources available. The kind of analytical models explained above make it possible for us to consider various policy choices for financing such a programme in a way that the net benefits of investment are positive. For informed policy-making, this analytical approach can be extremely helpful.

Vishakha Gandhi is a Intern Fellow at Infinite-Sum Modeling LLC and a Graduate Student at Gokhale Institute of Politics and Economics, Pune, India.