Eradicating poverty by accelerating economic growth and generating employment opportunities through industrialisation is a key policy priority for Bangladesh. The Government of Bangladesh is setting up 100 Special Economic Zones (SEZs) for creating 10 million jobs and generating an additional $40 billion exports. By offering attractive fiscal and financial incentives, and serviced industrial plots, these economic zones are expected to mobilise investments from both domestic and foreign sources. The Seventh Five Year Plan of Bangladesh suggests using SEZs as a policy tool for inclusive growth by promoting development in lagging regions within the country.
Regions in Bangladesh exhibit significant differences in many respects including in terms of location and distribution of economic and industrial activities. For example, employment-intensive manufacturing and export-oriented enterprises are largely concentrated in greater Dhaka and Chattogram regions. One issue is then whether SEZs in disadvantaged regions can generate inclusive growth while not affecting overall economic growth.

The Seventh Five Year Plan of Bangladesh suggests using SEZs as a policy tool for inclusive growth by promoting development in lagging regions within the country.

Policymakers from all over the world must confront a trade-off between balanced spatial distribution of economic activities and the benefits of agglomeration economies that tend to make industrial production concentrated in a few existing growth poles. The ‘new economic geography’ model, developed by Nobel laureate economist Paul Krugman, is the most powerful analytical framework to demonstrate how clustering forces generate an uneven distribution of production and income across regions. The ensuing agglomeration effects arise from interactions amongst scale economies, cost advantages (including trade costs) associated with geographical locations, factor price differences etc. Because of these factors, economic regions with higher production activities will be more profitable and will therefore attract even more firms. While there are efficiency gains from concentration of economic activity in a few locations, it is a major contributor to overall inequality within a country.
Some economists argue that while private sector firms will tend to concentrate in existing growth centres, state-sponsored industry location decisions consider regional balance as a priority issue. However, as the role of the state has been substantially diminished under policy liberalisation and reform programmes, industries are likely to be more spatially concentrated, accentuating regional inequalities. China offers an example of extensive interventions in addressing regional disparities, diverting economic activities from the coast to interior regions. But, critiques point out that replicating the Chinese experience elsewhere might not be possible because of the nature of its political and administrative systems and astounding growth performance which facilitates sustained resource commitments for regional transformation to take place. However, programmes like special economic zones can allow countries containing ever-growing regional disparities. 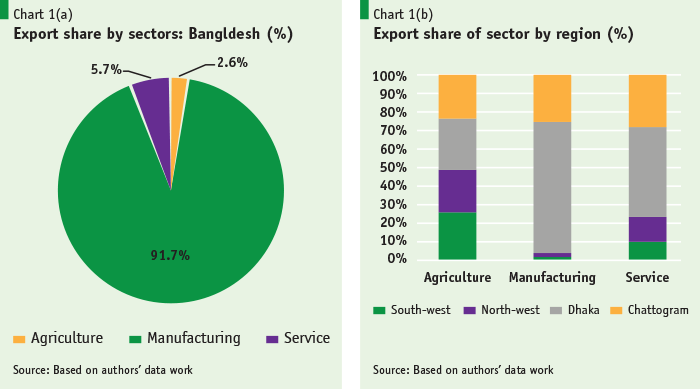 Spatial variation of development in Bangladesh

In Bangladesh, there is a general perception that the western part of the country (comprising the divisions of Barisal, Khulna, Rajshahi, and Rangpur) lags its eastern counterpart in most socioeconomic indicators. One problem in capturing regional disparities and understanding the impact of any relevant policy options is data deficiencies. Nevertheless, from the available information it can be inferred that north-west and south-west districts in Bangladesh together account for just about 30% of the country’s GDP. The greater Dhaka and Chattogram regions account for 87% of the country’s manufacturing GDP. As manufacturing constitutes about 92% of Bangladesh’s exports (Figures 1a and 1b), virtually all of it comes from these two regions only. The established economic theories, as alluded to earlier, would suggest worsening of the concentration of economic activities further.

Although the SEZ development work in a large majority of selected zones is at an early stage, it is useful to undertake some experimental policy simulations to consider the likely impact of new economic zones. Particularly, it is of interest to know how inclusive economic growth and development can be promoted through SEZs. The simulations are conducted using a specially-constructed four-region Social Accounting Matrix (SAM) for Bangladesh.

Simulation scenario (1) – export growth from the newly set up SEZs based on the existing regional production structures: As one of the objectives of SEZ policy is to achieve $40 billion in additional exports by 2030, this simulation assesses the impact considering that the new exports will follow the current regional production patterns. Therefore, under this scenario an overwhelming majority of export production takes place in greater Dhaka and Chattogram regions with only a modest boost for economic activities in north-west and south-west regions. Bangladesh’s GDP rises by 5% as against a 3% output growth from north-west and south-west districts. The poverty headcount ratio falls by 1.6 percentage points in the north-west and by 3.2 percentage points in the south-west (Chart 2). A total of 3.4 million jobs are created, of which just over 1 million are in the north-west and south-west regions (Chart 3). Overall, there are an additional 1.1 million jobs for women. Of these, 0.31 million are in western districts.

Simulation scenario (2) – export growth with enhanced participation of north-west and south-west regions in manufacturing activities: Under this experiment, it is assumed that $20 billion manufacturing exports are generated from the north-west and south-west regions (as a contribution towards the target of $40 billion additional exports). This results in massive growth of manufacturing output (by 15% and 20% in the north-west and south-west, respectively). These two lagging regions benefit from 1.28 million additional jobs, of which 0.43 million are for women. The poverty headcount ratio for the north-west declines by 3 percentage points while the corresponding fall for the south-west is 5.6 percentage points.
How different types of households participate in economic activities can give important insights into the inclusivity of growth. In simulation 1, most additional production is due to the greater Dhaka and Chattogram regions, but still households in backward regions increase their supplies of labour. However, given increased SEZ production in north-west and south-west regions under simulation 2, small farm and non-farm households in both the regions and lower-skilled households in north-west districts experience much higher demand for their labour (Chart 4). These households are known to comprise much of the vulnerable and excluded groups, and consequently they seem to benefit from the increased SEZ activities in backward regions. The overall growth impact under simulation 2 is slightly higher, and thus there is no growth compromising effects of regionally targeted SEZ policies. 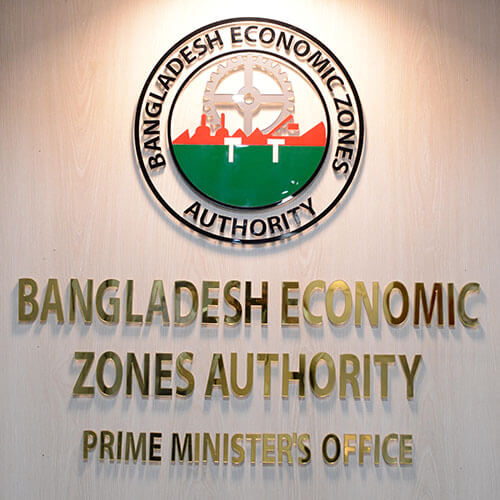 Simulation scenario (3) – export boost of agro-processing from north-west and south-west regions: It is widely regarded that the north-west and south-west regions are more suited for agricultural production. When a $20 billion agri-export demand shock is generated for these regions, the overall growth impact in the country is 1.65%. This comes with the generation of 2.2 million jobs: 1.31 million for the north-west and south-west districts including 0.27 million women’s jobs. Finally, under simulation (4) – SEZs-led investment push – if SEZs lead to doubling investment, the national GDP rises by 2.35%, creating 1.75 million jobs, leading to poverty reduction by 1.71 percentage points.
It is important to point out that the policy options are not mutually exclusive; i.e. a combination of the scenarios would be feasible and more appropriate. A mix of scenarios 2, 3 and 4 would be most practical in addressing regional inclusivity. 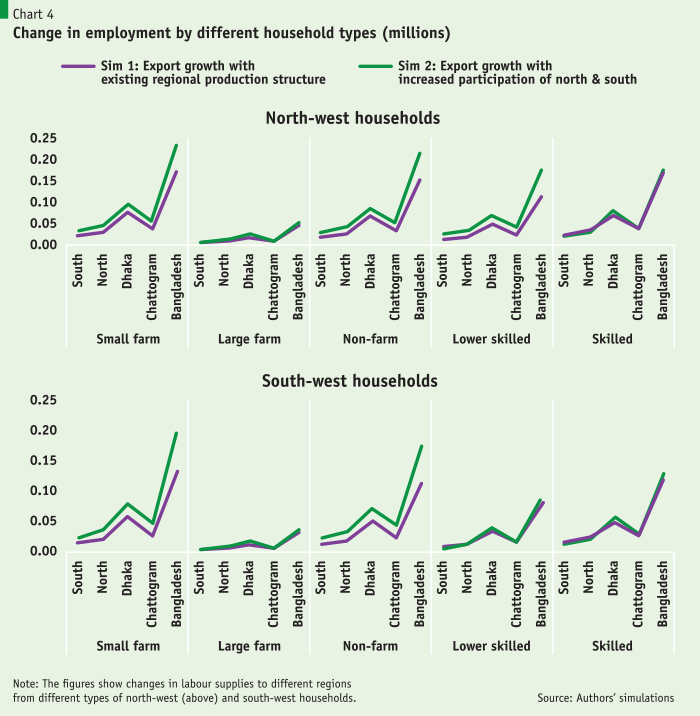 The simulation results above are quite encouraging about the potential impact that SEZs can have on overall output, employment generation and poverty reduction. However, the lagging regions may be subject to certain inherent limitations, yielding less-than-expected outcomes. Bangladesh’s experience with export processing zones (EPZs) already provides some hints in this respect. Three of the eight EPZs are in lagging regions. In terms of investment attracted and employment generated, the performance of these three is relatively weak. Particularly, the one in Mongla with easy access to a seaport has the least investment and smallest workforce employed. There are several other factors that must be taken into consideration to make SEZ-led policy effective for promoting regional inclusivity.

…the lagging regions may be subject to certain inherent limitations, yielding less-than-expected outcomes.

Developing too many sub-optimally sized economic zones can also undermine the benefits of economies of scale and externalities.

While SEZs can be an appealing policy tool for promoting regional development, and policy simulations can help understand the impact of different policy scenarios under ideal circumstances, there are several factors that must be taken into serious consideration to make it work effectively. There are valuable cross-country experiences and best practices that must also be carefully studied to derive lessons and consider appropriate policy measures.

This article is based on a paper prepared earlier as part of a project initiated by the Overseas Development Institute (ODI), London, UK, with support from the Department for International Development (DFID) of the Government of the UK.