Dhaka is home to 17 million people, and the population is expected to grow to 27 million by 2030. The city sees about 60 new private cars on the road every day. According to the Atlas of Urban Expansion, compared with 21% in the pre-1990 area, the share of built-up area in Dhaka occupied by roads fell to 12% in 1990–2014. Also between pre-1990 and post-1990, the average road-width reduced by half, with 56% of roads being less than 4 m wide. Last year, the World Bank highlighted that levels of traffic congestion in Dhaka meant that the average driving speed would soon drop to 4 km per hour, which is slower than a person can walk (Siddique, 2017). No surprise, then, that, collectively, commuters in Dhaka lose a total of 3.2 million working hours each day on the road.

…collectively, commuters in Dhaka lose a total of 3.2 million working hours each day on the road.

The insufficient road network, lack of parking space, missing traffic lights, etc., lead to a sorry state of affairs on the roads of Dhaka, which tax-paying citizens have to confront every day. As noted by Hobbes (2014):

Like many developing-country capitals, Dhaka’s infrastructure doesn’t match the scale of its population. Just 7 percent of the city is covered by roads, compared with around 25 percent of Paris and Vienna and 40 percent of Washington and Chicago… Dhaka also suffers from the absence of a deliberate road network, feeder streets leading to arterials leading to highways. There are 650 major intersections, but only 60 traffic lights, many of which don’t work.

The government of Bangladesh has responded mainly by focusing on improving the city’s infrastructure—a basic requirement. The Strategic Transport Plan for Dhaka (originally produced in 2005 and revised in 2015) suggests policy coordination within the metropolitan area; integration of an urban development master plan and urban transport master plan; development of a hierarchical road network and road classifications to guide design (and parking provision); and promotion of integrated urban and transport development, particularly transit-oriented development.
More recently, the government has proposed reviving waterways, elevated transport corridors, modern modes of rapid mass transport systems, etc. This commitment has been backed by significant budget allocations. The Perspective Plan 2021 moots the introduction of Bus Rapid Transit, with high-capacity dedicated bus lanes. It also gives emphasis to introduction of a rail-based mass transit system as part of the long-term integrated transport strategy for Dhaka Metropolitan Area. It also suggests the construction of an overhead monorail system, an elevated expressway and circular waterways around Dhaka.
The importance of these infrastructural advancements is indisputable. This article is about the challenges that hinder institutional reform.

Laws exist to cover all aspects of road traffic management in Dhaka. And institutions responsible for enforcing rules exist. But implementation remains a problem. Ensuring compliance with laws is an uphill battle. Public and private vehicles that are unfit for the road ply unhindered. Drivers without proper driving licences run riot.
A common notion in public policy is that policy-making and implementation are divorced from each other, in the sense that politics surrounds decision-making activities (to be carried out by the elected political leadership) while implementation is an administrative activity (to be handled by bureaucracies, such as the agencies responsible for controlling traffic in Dhaka). However, researchers have found that such distinctions are not helpful in understanding policy implementation in developing countries.
The political leadership is surrounded by multiple interests, each competing for attention and/or patronage. The typical political response is one of selective patronage dispensation. Populist policies that are aimed at winning over the masses are usually born here; even when policies being advocated are not entirely populist, their implementation is hurried through an ill-prepared bureaucratic frame. 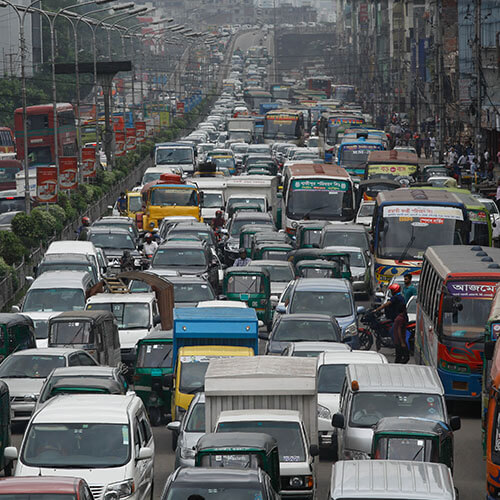 An ideal bureaucracy is an efficient implementation machine. Impersonal bureaucracies, comprising appointed officials, are supposed to possess technical knowledge and skills in professional organisation. The components of a bureaucracy are defined not by individuals but by positions that make up the structure. Max Weber conceptualised bureaucracy as the supreme form of organisation, with bureaucrats expected to be true to their position and to follow hierarchy and the rules that govern the organisation. However, in several cases in the developing world, the bureaucracy is an integral part of political machinations. Frontline workers, who are essentially the face of the state to its citizens, are motivated by political considerations that compete with the ideal of an impersonal bureaucratic imperative.
The interaction between the bureaucracy and the political leadership remains an important topic of public administration research, as we try to understand how to truly ‘influence policy’ and initiate lasting reform as outsiders. One of our primary concerns must be to understand better the constituencies that political leaders and bureaucrats are interested in. In dealing with traffic issues in Dhaka, what can we do to expand the scope of political constituencies to an extent that bringing about reform becomes an urgent prerogative? At the same time, what can we possibly do to encourage the bureaucracy to discharge its duties?

In dealing with traffic issues in Dhaka, what can we do to expand the scope of political constituencies to an extent that bringing about reform becomes an urgent prerogative?

Urban traffic is a wicked problem: in theory, the technical fixes are known; in practice, the context is complex and ever-changing, with multiple manifestations of the problem, varying levels of information and the involvement of numerous stakeholders with competing priorities.
In Dhaka, the factors that determine the nature of traffic can be divided into two broad categories. First are design issues other than physical infrastructure—that is, systems and processes that are supposed to work to enable smooth traffic on the road, such as issuance of route permits for public transport, vehicle fitness permits for private and public vehicles and driving licences. Second is the on-road behaviour of different actors involved, such as vehicle drivers, pedestrians, two-wheeler riders, rickshaw pullers, etc.; visible signs that traffic regulations are in place, such as functioning traffic signals at intersections and traffic police; and enforcement of regulations by those responsible.
The factors that contribute to the traffic chaos in Dhaka overlap quite neatly with other manifestations of poor governance, such as corruption and weak institutional checks and balances. The traffic situation is also a good indicator of the extent to which a society is ‘rule-abiding’ in nature.
To describe just one aspect of the problem: six agencies of the government under different ministries are directly engaged in managing the affairs of Dhaka city’s transport sector. The agencies to be studied from a governance perspective are the Bangladesh Road Transport Authority (BRTA), the Dhaka Metropolitan Police (DMP), the Dhaka City Corporation (DCC), the Dhaka Transport Coordination Authority (DTCA), the Dhaka Mass Transit Company (DMTC) and the Capital Development Authority of the Government of Bangladesh (RAJUK). Two of these agencies are engaged in developing traffic and road infrastructure; two others play regulatory roles in the domain of urban transport management; and one agency is entrusted with the coordination of policies on matters of urban transport. This scenario of overlapping jurisdictions—prone to both blindspots and turf wars—contributes to a general environment of low mutual accountability. Moreover, institutional capacity, to both regulate and enforce, is limited, and vested interests rule the roost.
This is a good example of how the interaction of political players and bureaucratic agencies produce perverse outcomes that lead to declining standards of public service.

The tale of route permits

The Bangladesh Road Transport Authority (BRTA) issues route permits to run commercial vehicles such as buses. The BRTA awards route permits on the recommendation of the Regional Transport Committee, headed by the Metropolitan Police Commissioner. The 10-member committee also includes representatives of bus owners and the Bus Employees Association. The bus owner representatives usually have strong political connections, and jostle for control over the most profitable routes.
Ideally, route permits should be issued only after a thorough assessment of existing bus density, travel demand, time per trip, passenger capacity of the vehicle, estimation of vehicle emissions, etc. At present, the BRTA lacks the ability to undertake these assessments, and as a result the system remains susceptible to being influenced.

Previous technocratic approaches have not been successful. Studies in the past recommended rationalising the awarding of bus routes through a transparent mechanism or installing modern vehicle inspection centres, but these projects were eventually not implemented. Similarly, technical fixes, such as vehicular pollution meters and clean fuel options, exist but have not solved the problem. It appears that a combination of top-down and bottom-up approaches is required.
This is where ‘social accountability’ mechanisms may have a role to play. Social accountability refers to a set of approaches that seek to foster accountability through enhanced civil society engagement, as opposed to relying merely on top-down rules-based enforcement. From what we have seen of public demonstrations demanding better conditions on the roads of Dhaka, there is an opportunity for the government to act quickly to engage people in this reform process. One of the ways of doing this is to initiate a process whereby public feedback can be incorporated directly into day-to-day management and periodic review exercises. Bangladesh is a thriving hub of technological innovation; creating tools that enable an easy two-way flow of information from citizens to the authorities can make a difference.
Moreover, traditional power structures are well entrenched, and in the short run a more vocal civil society will lead to an escalation of tensions on the roads. The situation here will thus need to be managed carefully. It is also important not to give in to purely short-term reactionary tendencies: government institutions are remarkably resilient to change. Unless the proposed efforts are able to take deep root in the institutional culture, and are complemented by an ever-vigilant civil society, the chances of slipping back into old ways of working will remain high.

The state of the road traffic in Dhaka is a complex problem. To address it, there is a need to put in place a combination of top-down and bottom-up approaches. For the government of Bangladesh, this is also an issue fraught with challenges: on the one hand, public support needs to be guaranteed if we are to achieve moderate success in decongesting roads and making them safer for all commuters; on the other hand, there are powerful interests at work that will face disruption, and not remain silent. The challenge will lie in finding a win-win solution through a combination of enforcement and civic engagement.
What is known is that this cannot be delayed any further. Public sentiment is firmly in favour of reform, and this should win the day.