By  Danish A Hashim, Anisha Kukreja

In the recent few years, India has made a significant stride in the Doing Business Ranking of the World Bank. From a lowly 142nd position in 2015, the country has swiftly and consistently moved up in the index to the 77th position (out of 190 economies) in 2019. As a result, it has become the top performer in South Asia, climbing up the ladder from the 6th position in 2015. Such a rapid improvement in the performance of India could be an inspiration to many lagging countries, including Bangladesh and Afghanistan, which currently rank the lowest in the South Asian region (Chart 1).

The phenomenal enhancement in India’s Doing Business Ranking is an outcome of the government’s strong intent and commitment to improve the business climate in the country. The emphasis has been on simplification of rules and procedures to ensure transparency and speeding up administrative processes, in line with the industry requirements. The reform measures aim to facilitate entry as well as exit for businesses, both of which are highly significant for attracting investments and sustainable growth.

The phenomenal enhancement in India’s Doing Business Ranking is an outcome of the government’s strong intent and commitment to improve the business climate in the country.

The turnaround in India’s Doing Business Ranking in a matter of just five years is the result of a well-designed and coordinated initiative of the Modi government, which is determined to see India among the top 50 ranked economies in just next two years. The initiative is being led and monitored by the Department for Promotion of Industry and Internal Trade (DPIIT), Government of India. DPIIT has been coordinating with the relevant Ministries of the Central government to introduce the necessary reforms. It has also been encouraging the state governments of Delhi and Mumbai – two cities covered by the World Bank Survey – to implement the required reforms under their purview. Given that certain reform measures come under the ambit of the Central government while others under the state governments who work independently, the task for DPIIT has always been daunting. It is important to mention here that DPIIT has also been steering reforms across the country with equal vigor and passion, which are outside the scope of the World Bank Survey.
The present article attempts to highlight some of the key initiatives that have helped India emerge as a leader in the Doing Business Ranking in South Asia, besides indicating the need for other South Asian countries to focus on improving their overall business environment as well.

Before we proceed further, it would be helpful to provide a crisp detail about the approach adopted by the World Bank for calculation of scores and ranking of countries. The Doing Business Report is brought out annually, which covered 190 economies in the latest edition. The ranking is popularly referred to by businesses, domestic as well as global, to understand the investment climate of a country, from starting to exit. With cross-border investment getting increasingly easier, the importance of the ranking is also growing commensurately, as it helps the industry to decide on the location of their new investment.

The World Bank Ranking, which began in 2006, captures the experience of the private sector stakeholders in a country with their regulators and government authorities, by measuring the time, costs and red tape they deal with.

The World Bank Ranking, which began in 2006, captures the experience of the private sector stakeholders in a country with their regulators and government authorities, by measuring the time, costs and red tape they deal with. These experiences are covered under 10 crucial indicators, constuting the business environment and covering the entire life-cycle of a business (indicators are mentioned in Table 1 and Chart 2). Based on the survey responses from the users, the World Bank prepares scores and the Distance to Frontier (DTF) for each country as well as indicators. These responses are collated from the largest business city of each economy. However, in case of 11 economies, including India, Pakistan and Bangladesh, whose population exceeds 100 million; responses are also collected from the second largest business city of the economy. 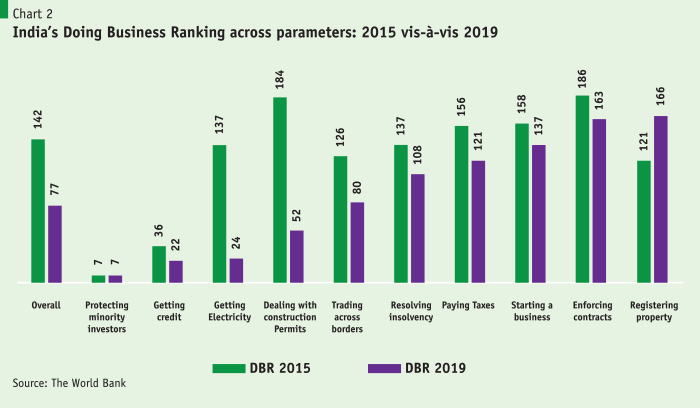 While India, Bhutan and Sri Lanka in the South Asian region feature among the top 100 ranked global economies, Bangladesh and Afghanistan are on the other side of the extreme. India and Bhutan each occupy the highest ranking in 4 areas (out of 10) of the Doing Business indicators; the remaining two being shared between Pakistan (in resolving insolvency) and Afghanistan (starting a business). This shows that a very few countries in South Asia have so far worked on improving their business environment in line with the World Bank requirements.

India and Bhutan each occupy the highest ranking in 4 areas (out of 10) of the Doing Business indicators; the remaining two being shared between Pakistan (in resolving insolvency) and Afghanistan (starting a business).

It is also important to note that all countries in South Asia, including India and Bhutan, offer large scope for improvement in one or the other indicator. This underscores the need for countries focusing on all areas of doing business indicators, rather than working on a few. Even one lagging area may pose severe challenges to businesses, at one stage or the other.

Currently, India is among the top 25 economies in 3 areas – protecting minority investors (7), getting credit (22), and getting electricity (24). It is among the top 80 economies in 2 additional indicators – dealing with construction permits (52) and trading across borders (80). In the remaining areas, the jouney is long, with varying distance across parameters (Table 1). 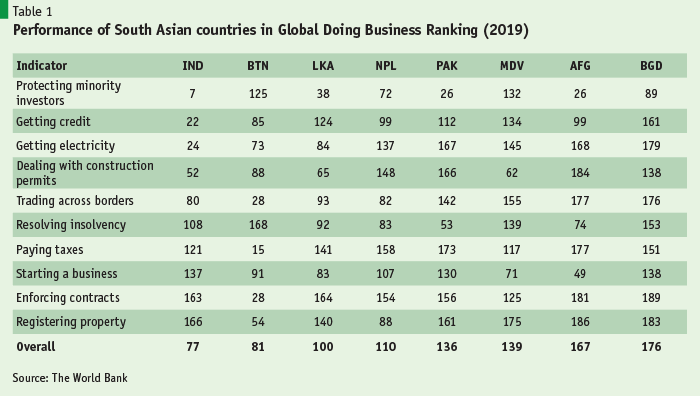 The country has shown that if determined efforts are made then the improvement in ranking can be achieved in a sharp manner. In the latest year, for instance, when the overall Doing Business ranking of the country improved by 23 points, Dealing with Construction permits saw an improvement of a whopping 129 ranks, followed by trading across borders by 66 ranks and starting a business by 19 ranks.
Similarly, last year when the country’s overall ranking improved by 30 ranks, it was helped by the sharp improvement in the ranking of paying taxes by 53 ranks, followed by resolving insolvency by 33 ranks and getting credit by 15 ranks.
Comparing the latest performance of India across parameters with that of 2015, it is evident that the country has improved significantly in all parameters, barring registering property (Chart 2). The sharpest gainers in the last 5 years are dealing with construction permits, getting electricity, and trading across borders.

Some of the key business reforms, which have provided an impetus to India’s Doing Business Ranking across indicators, are indicated below.

The growing popularity of the Doing Business Ranking among the businesses across the world for deciding their future investment destinations clearly cut outs the job on the ease of doing business front for the government in a country. No economy can now afford to have a lackadaisical approach for the ranking, especially in South Asia, where investment and job creation assume a high priority. India, in the last 5 years, has been working in a mission mode to improve the investment climate, covering virtually all aspects of the Doing Business Ranking. There are a few more countries, including Bhutan and Sri Lanka, which have maintained a relatively high levels of ranking. The need of the hour, however, is that all countries in South Asia, work aggressively on improving the business environment. Bangladesh and Afghanistan, ranking lowest in South Asia, will have to do much more, learning from the experiences in implementation of business reforms in the neighboring countries.

Danish A. Hashim is Head of Ease of Doing Business Confederation of Indian Industry

Anisha Kukreja is a Research Consultant at Confederation of Indian Industry