Tiding the Bangladesh economy over in the time of coronavirus

Tiding the Bangladesh economy over in the time of coronavirus

Business groups, local and state leaders and a growing chorus of lawmakers and economists begged the federal government to spend trillions of dollars to pay workers to stay home and funnel money to companies struggling with an abrupt end to consumer activities. The US administration initially floated several ideas for helping industry without conveying a clear plan. After the main trade group for airlines suggested a $50 billion bailout, Trump’s chief economist, Larry Kudlow, said: “We don’t see the airlines failing, but if they get into a cash crunch we’re going to try to help them.” Employers and employees are torn between fears of being exposed to the virus and fears of running out of money to pay for food and electricity. And government officials are left with the unhappy task of shutting down businesses that provide wages for large swathes of their communities, while wondering what steps their neighbors are taking.

On Monday, Senator Mitt Romney called for the government to cut a $1,000 cheque, immediately, to every American. Nobel Prize-winning economist Joseph Stiglitz said: “People don’t have reserves, they live hand-to-mouth. People won’t be able to pay their rents, landlords won’t be able to pay their oil bills, the whole system could break down.” In the end, Trump administration woke up and proposed a $850 billion package on Tuesday, along with direct income support for the citizens, which temporarily helped at least the market.

Over in Bangladesh, coronavirus is likely to impact the economy through two important channels: (i) transmission of the expected global economic meltdown on Bangladesh economy initially from the supply shock (as the epicenter of the virus was initially located in China which is the largest trading partner of Bangladesh) and subsequently the expected meltdown in export demand in the EU and the US; and (ii) contraction of domestic demand in the domestic economy if the virus spreads in Bangladesh and through the transmission of external shock to the domestic economy. 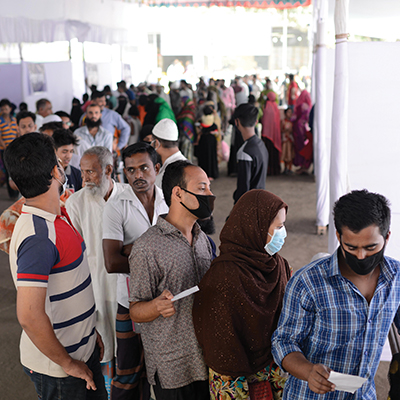 As European country authorities are declaring lockdowns of major parts of their territories and putting in place restrictions on cross border movement of people, closing down all nonessential (primarily groceries and pharmacies and hospitals), sales of garment and other exports from Bangladesh will disappear until the situation improves in the destination countries. While the garment sector is slowly coming out of the supply disruption due to China, the massive demand compression in destination countries in Europe and the US will in all likelihood have major reduction/cancellation of export orders from these two regions. The EU alone accounts for 62 per cent of exports from Bangladesh and the US is the largest destination country for the country’s exports.

The collapse in the demand for exports will be much beyond the garment sector to include other exports like leather and footwear, jute and jute goods, frozen food, home textiles, light engineering, plastic products and electronic goods. This time, the collapse in demand will not be reduction in demand; it will, in all likelihood, be a complete cancellation or postponement of orders from most export destinations.

Compounding the first round adverse impacts, there will be second round impacts on other sectors from the depressed domestic demand. The impact from international trade will be in billions of dollars and if not urgently addressed by a comprehensive policy package will lead to massive layoff of industrial sector workers. However, the impact on the domestic economy from demand compression due to restricted mobility and fear factors will be across the board as restaurants, hotels, vacation resorts, travel (domestic and international), slower Pahela Baishakh and Eid demands, domestic job losses in wide ranging sectors — will be massive. The Bangladesh economy has never seen such a multi-pronged pressure leading potentially to huge compression of domestic demand. This is likely to be unprecedented and will require unconventional and unprecedented forceful policy response from the government. So far, we have not seen that. In fact, it has been a virtual policy inaction. Only the Bangladesh Garment Manufacturers and Exporters Association is running from post to pillars, as if the garment factory owners are asking for favour from the government. I do not see the Federation of Bangladesh Chambers of Commerce and Industries and its partner organisations preparing documents on the impact of coronavirus on their respective sectors and the whole economy.

The Bangladesh economy has never seen such a multi-pronged pressure leading potentially to huge compression of domestic demand. This is likely to be unprecedented and will require unconventional and unprecedented forceful policy response from the government.

The issue is not of saving a sector or two by giving favours to them; the issue is saving the economy and jobs for the millions. The government has to act now — not in the future. We need to take lessons from other governments and the central banks. The governments across the globe have acted on two fronts: (i) the central banks came up with liquidity support and lowering of interest rates; and (ii) the ministry of finance or Treasuries came up with fiscal packages to partly offset the income losses incurred by the corporations to protect jobs and direct income support to citizens impacted by the lockdown and loss of employment. Some governments have frozen payment of house rents. Of course, all testing and medical costs are being covered by the government. We are aware that Bangladesh does not have the capacity that other industrial countries have. But the authorities must do what Bangladesh can afford to do under the current circumstances. They can go for massive injection of liquidity into the economy. The Bangladesh Bank should go for quantitative easing through purchase of Treasury bond and bills. The initial amount of liquidity injection could be in the amount of Tk 25,000 crore. The strong statement would be that the BB will go well beyond that if the situation warrants.

We are aware that Bangladesh does not have the capacity that other industrial countries have. But the authorities must do what Bangladesh can afford to do under the current circumstances. They can go for massive injection of liquidity into the economy. The Bangladesh Bank should go for quantitative easing through purchase of Treasury bond and bills.

As the treasury bond/bill prices will increase, the interest rates will come down through market mechanism. The Bangladesh government T-bills and bonds held by the banking system is in the amount of about Tk 1.6 lakh crores and part of that should be bought by the BB to inject the required amount of liquidity. The government should also allow extension of all maturing letters of credit due to disruption of supply chain. The tenor of back-to-back LCs issued against export development fund (EDF) may be increased from 3 months to 6 months. In addition, all healthy firms coming under financial stress due to cancellation of orders or no orders from the European and American firms should be given the option to consolidate the outstanding maturities over the six-month period and the consolidated amount be restructured and payable over a three-year period. Banks should also be encouraged to not create forced loan against overdue back-to-back credit and enhance the credit limit. The BB can also cut the policy rates by several percentage points to low single-digit levels. The finance ministry should put in place an emergency economic package of at least Tk 25,000 crore (about $3 billion or 1 per cent of GDP) and should remain committed to support workers and entrepreneurs with more resources if needed.

The objective will be to maintain the level of employment at the current level to avoid massive unemployment and potential social unrest. The increase in fiscal deficit by one percentage point should not be a matter of concern. Other than garment and the export sectors, the government should also bring those domestic service sectors significantly impacted by the global and domestic spread of the virus. This class of enterprises include hotels, restaurants, resorts movie theatres, theme parks etc. 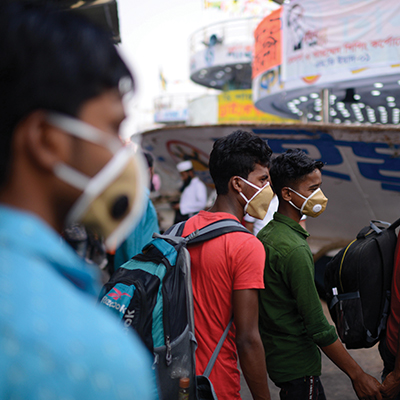 The set of economic measures outlined above is by no means exhaustive and should be considered as the key elements of the economic rescue package that the government must be considering at this critical juncture. The size and range of measures to be considered would also change over time, depending on how long the global crisis lasts, how much is the spread of the virus in our own country in the coming months and the depth of demand compression Bangladesh experiences. Accurate economic data will be critical in this monitoring and fine tuning of the policy framework.

Some critics might note what would be the balance of payments impact of the measures noted above and will these expansionary measures be consistent with fiscal sustainability?

If we look at the BoP, the effect of demand compression in Bangladesh is already visible with imports declining by about 13 per cent in January over the corresponding month last year. The decline in imports already exceeds the decline in exports, contributing to a significant decline in the external current account deficit to $1.5 billion during July-January period of fiscal 2019-20. A year earlier, it was more than $4 billion. In recent days, also reflecting the effect of the collapse of petroleum product prices in the global market — a result of the demand collapse in the major economies of the world — there has been an oversupply of dollars in the interbank foreign exchange market and the BB has rightly started to purchase dollars in significant amounts to prevent its appreciation. This oversupply of dollars is likely to continue in the coming months as domestic demand pressures intensify.

On fiscal sustainability, I would simply say that Bangladesh’s fiscal sustainability will be threatened by the government’s inability to undertake reforms at the National Board of Revenue and the secular deterioration of the tax/GDP ratio over the years. The tax/GDP must at least double from its unacceptably low current level of 8.6 per cent in fiscal 2018-19, but that is a medium-term challenge. For fiscal 2019-20, an increase in the overall deficit by an additional 1-1.5 percentage point of GDP in itself will not be of any significant concern when Bangladesh’s debt-to-GDP ratio is still one of the lowest in the world.

As regards the threat of inflationary pressure, I would simply say that monetary easing/stimulus in a deflationary environment is precisely aimed at preventing price deflation. In this environment there should not be any threat of inflation and that has been the case in almost all countries. In the event inflationary pressures emerge, the authorities should consider as indication for withdrawal of the monetary stimulus and a success for their monetary interventions.

The proposals outlined above are unorthodox and should only be applied under conditions of extreme payments difficulties and demand compression. The Bangladesh authorities must not allow a deflation of the economy, because the cost of deflation will be wholesale bankruptcy or loan defaults, closure of production units and massive job losses. In sprit, what I am suggesting is a form of social contract such that all workers would be protected so that their collective demand is met and the economy avoids a collapse in domestic demand. If domestic demand is protected close to the recent normal levels, the country would avoid massive economic meltdown.

Ahsan H. Mansur is the Executive Director of the Policy Research Institute of Bangladesh. In his long career, he served the International Monetary Fund (IMF), working in important functional departments (Fiscal Affairs and Policy Review and Development departments) and area departments (Middle East and Central Asia and Asian departments) of the IMF. He also served as the IMF Senior Resident Representative to Pakistan during 1998-01 and as the Fiscal Advisor to the Minister of Finance, Government of Bangladesh (1989-91). He completed his PhD in Economics from University of Western Ontario. He has published extensively in various prestigious journals (including Econometrica, Journal of Economic Theory, and IMF Staff Papers), edited books on special economic topics and in the IMF Occasional Paper and Working Paper series.