During the first two decades of its independence Bangladesh continued with the Pakistan period strategy of economic development. It was the dominant strategy of development of the developing world for the greater part of the last half of the twentieth century. Widely known as ‘import substitution industrialisation’ strategy, its emphasis was on substituting imports with domestic production without much consideration of international comparative advantage. The principal tools for achieving this end were tariffs and non-tariff measures that erected a protective wall around the economy to prevent foreign competition against domestic goods. The outcome of the strategy was costly and quite disappointing; the domestic consumers paid high prices for the imports (and importables), but the GDP growth rate remained mostly much below 5%. The export-GDP ratio stagnated below 5% through the decades of the 1970s and 1980s and the balance of payments difficulties worsened.

The export-GDP ratio stagnated below 5% through the decades of the 1970s and 1980s and the balance of payments difficulties worsened.

Bangladesh finally decided to open up the economy after the first government elected through a free and fair election under a caretaker government took office in 1991. Tariffs were reduced and other barriers to trade lowered in a partial liberalisation of trade. The unweighted MFN tariff rate quickly came down from 59.4% in 1991-92 to 27.9% in just three years, and to 14.4% in 2015-16 at a much slower rate. Import restrictions came down from 239 commodities in 1990-91 to 120 in 1995-96. As a result the export-GDP ratio started increasing slowly for the first time. It rose gradually from 5.6% in 1990-91 to its highest value 18.3% (in Taka terms, Bangladesh Bank data) in 2011-12. The merchandise trade-GDP ratio increased from 17.0% in 1990-91 to 42.3% in 2011-12.
These changes were the expected outcomes of the trade liberalisation policy although the rate of progress was much slower than many East and South-East Asian countries. But what has happened since then is baffling. The merchandise export-GDP ratio has fallen sharply by more than a quarter from its high point to only 13.2% by 2017-18. The trade-GDP ratio has also tumbled to 32.6%. This reversal in trade performance is unexpected and should be of concern. But it is yet to find a place in public or economics discourse.

It does not need mentioning that if the situation does not improve soon the country will face a balance of payments or external debt difficulties in the near future. Since inception, Bangladesh had run large trade deficits; however, by 2001-02 workers’ remittances reached a level that offset the trade deficit such that for the first time the current account deficit turned into a surplus and continued to be surplus for the next 14 years (except for one year), which helped build up a large stock of international reserves. However, subdued export performance since 2011-12 and stagnation in remittances during the last several years eventually turned the robust current account surplus into a sizeable deficit by 2016-17. It blew up to a mammoth $9.8 billion in 2017-18 with a spurt in import. The stock of external debt doubled in just six years (2013-2018). It had taken more than two decades to double before this period.

Since inception, Bangladesh had run large trade deficits; however, by 2001-02 workers’ remittances reached a level that offset the trade deficit such that for the first time the current account deficit turned into a surplus and continued to be surplus for the next 14 years (except for one year), which helped build up a large stock of international reserves.

Since the value of export did not decline since 2010-11, the reduction in export-GDP ratio could have arisen only if the rate of growth of export were less than the rate of growth of GDP. Both export and import of the country have increased on an annual average rate of about 6.5% since 2011-12, but GDP has increased by 11.7% in nominal dollar terms. (A similar conclusion also holds in Taka terms). That obviously pulled down the export-GDP as well as the trade-GDP ratios. Since it has been already claimed that this year’s GDP growth rate would accelerate, the export-GDP ratio is likely to fall further unless export increases at a much faster rate.
The really surprising fact is that the reduction of export share in GDP was accompanied by the fastest ever recorded growth of GDP in the history of the country. The annual average GDP growth during the last six years (2011-12 to 2017-18) climbed to 6.8%. It was 6.1% during the previous six years. This has some important implications for the development strategy of the country. The export-led growth strategy that the country had adopted since the early 1990s is based on the assumption that a more open economy, i.e. greater trade, fosters higher economic growth due to such factors as enlarged market size, economies of scale, better allocation of resources, foreign investment, technology transfer, learning and better management practices. Bangladesh economy did move from about a 4% growth regime before the 1990s to a 6% growth in the first decade of the new century. However, the surge in growth in the second decade cannot be attributed to greater openness of the economy since it occurred with a very substantial decline in the openness of the economy as measured by the export (or trade) GDP ratio. If this is not a temporary aberration from the previous trend (as the dip was during the Great Recession) then the economic development strategy of Bangladesh needs to be re-evaluated. With the external sector in relative decline it is the internal sector that must have become the driving force of the economy. The greater liberalisation of the economy has perhaps succeeded in also making the internal sector more productive. More attention needs to be paid now to the management of internal demand and production for sustaining the higher growth. Some countries, such as China, have already moved in this direction. 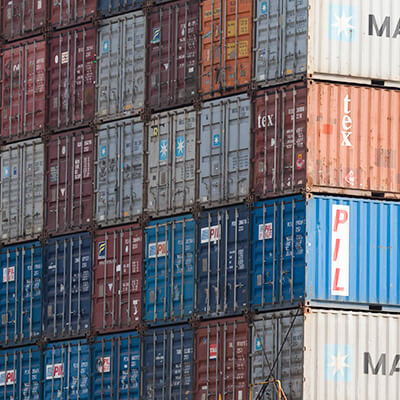 The decline of the external sector in the national economy in recent times is not unique to Bangladesh. Many countries around the world, such as Brazil, India, Sri Lanka, Chile, China, Indonesia, Malaysia and Philippines, have undergone similar changes since the Western financial crisis of 2007-08. Indeed, according to World Bank data most of the developing countries of the world experienced such a downward trend. The low and middle income countries, which comprise most of the developing countries of the world, had their collective export-GDP ratio gradually rise to nearly 32% at the time of the financial crisis, but suffered a sharp decline to 23% by 2016 (see Chart 2). It is noteworthy that few of the most successful export-oriented economies could avoid a large reduction in the export-GDP ratio (a notable exception is Vietnam). 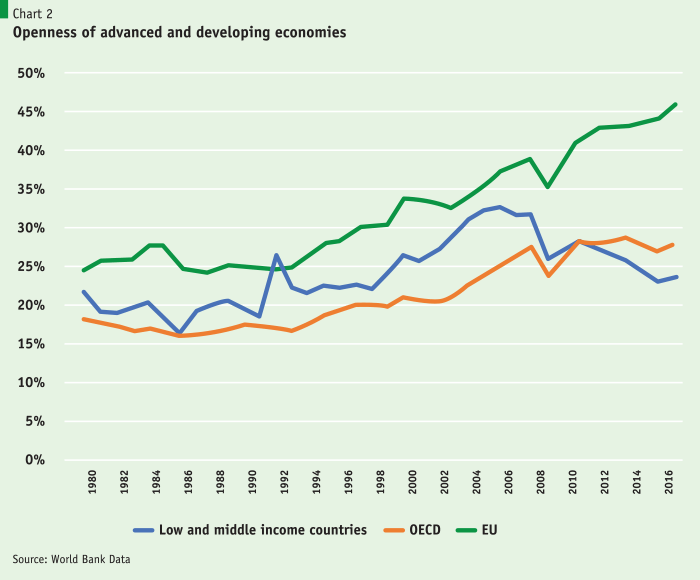 On the other hand most of the developed countries of the world including USA, Germany, Belgium, France, Italy and UK had their export-GDP ratios increased. Collectively OECD and European Union, which comprise mostly rich or developed countries, had their export-GDP ratios increased (Chart 2). This offset the reduction suffered by the developing countries (including low and middle income countries) such that the world export-GDP ratio did not suffer much since the financial crisis. It would appear that world trade is undergoing a structural change whereby the richer countries are becoming more export-oriented while the developing countries are moving in the opposite direction. In addition most developed countries also improved their current account balances considerably. This of course means that the developing countries had their current account balances deteriorated. For example, the most indebted developed country, USA, reduced its current account deficit from an annual average of 5.1% (2007-09) to 2.3% (2014-16), but the most successful exporting country of the world, China, had its current account surplus cut down from 9.1% to only 1.9% A correction of the international imbalances that adversely impacted the Western countries, as claimed by Alan Greenspan, seems to be well under way.

It is pertinent to mention here that the falling export-GDP ratio of the developing countries has no implication for the share of these countries in world trade. Indeed, the share of the low and middle income countries in world trade has undergone a secular increase as development took hold in these countries, while the share of the richer countries suffered a secular decline.
Since the reduction in the export-GDP ratio of Bangladesh appears to be part of a global phenomenon, it may not be useful to seek reasons for the decline in only such domestic matters as infrastructure or overdependence on apparel export. It is more likely that a common set of global factors is the principal force driving the reduction in export’s share of GDP of the developing world. The much slower growth rate of GDP of the OECD countries, which are the main export market of the fast growing developing countries, has perhaps restrained a more rapid expansion of the export of the latter. The global dimension of the phenomenon probably means that it may not be reversing anytime soon.
Bangladesh and other developing countries are not very likely to receive much positive help from the Western countries in navigating their economic ships in the emerging turbulent seas. The rise of populism in the West will make it difficult to advance the case for globalism. It is also very unlikely that the developing countries with varied interests will be able to agree on a coordinated effort to present a unified front to protect their collective interest in the near future. Each country will have to deal with the emerging situation on its own. The case of Vietnam demonstrates that it is possible for some individual countries to buck the trend through appropriate policies.