Can proxy means test ensure universal coverage of the poor in Bangladesh?

Can proxy means test ensure universal coverage of the poor in Bangladesh?

Bangladesh spend about of 2.2 % of her GDP on various social security (SS) programmes – predominantly targeting the poor people. The methods followed in Bangladesh to target poor has been inefficient resulting in high level of under coverage of poor and leakage. Under coverage which is also known as ‘exclusion error’ denotes sum of actual poor wrongly classified as non-poor as a proportion of the total poor. On the other hand, leakage known as ‘inclusion error’ is the sum of actual non-poor incorrectly classified as poor as a proportion of the total poor (Johannsen, 2006). HIES (BBS, 2016) data envisaged that in 2016 incidence of under coverage was 71 % and leakage was 47 %. Due to these high levels of under coverage and leakage, social security spending has been failed to attain the desired impacts on poverty and inequality. Against this background, government has undertaken a project to develop a comprehensive database of all households (known as the National Household Database – NHD) and use ‘Proxy Means Test (PMT)’ model to improve the targeting of poor and thereby reduce the high level of exclusion and inclusion errors. The prime objectives of the PMT model as stated in the NHD project (2019) are (i) to maximize coverage of the poor and vulnerable population given limited budget; (ii) to make the system fully consistent with the goal of universal coverage of the poor; and (iii) to address the key challenge to build a cost effective system to identify the poor. 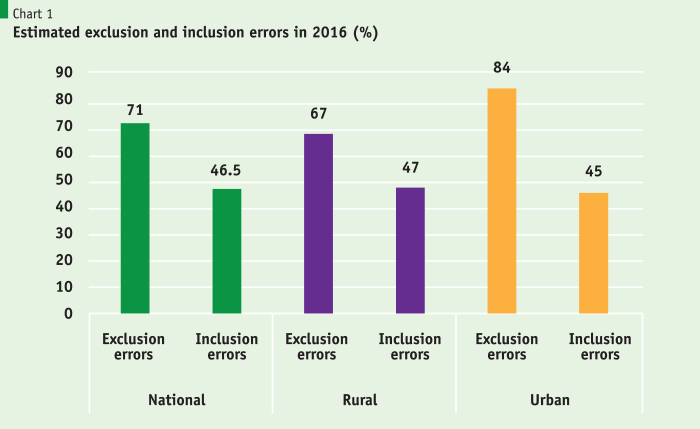 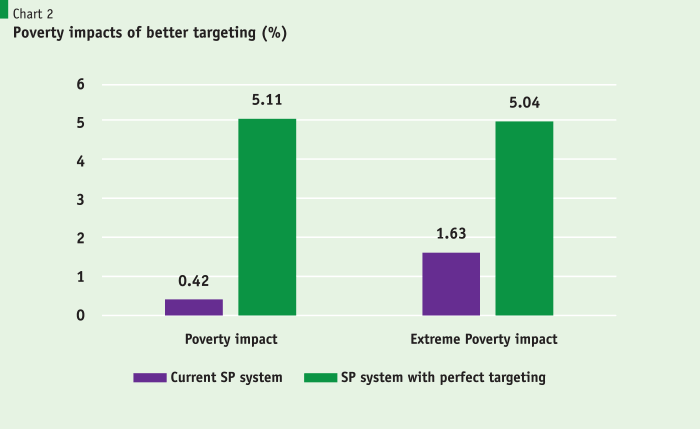 Poor targeting is turned out to be costly in Bangladesh’s pursuit of reducing poverty. Under the current SS system, additional poverty impacts of 2.2 % GDP spending on SS programmes is only 0.42 % (i.e. the difference between poverty rate of 24.3 % with SS and 24.81 % without SS). However, improve (or perfect) targeting of deserving beneficiaries may have higher impact on poverty reduction in Bangladesh. Micro-simulation using HIES 2016 suggests that if the resources saved from complete removal of exclusion and inclusion errors were spent on poor households – the head count poverty measured by the upper poverty line declined by 5.11 percentage points (i.e. from 24.3 % to 19.7 %). This implies that with no or minimum extra programme cost, additional 7.4 million can be lifted out of poverty. In the case of lower poverty line, the percentage point decline was 5.1 – implying that with no or small additional programme cost, additional 8.1 million can be pulled out of extreme poverty. Thus, due to large exclusion and inclusion errors, current SS is ineffective in Bangladesh – measured by their impacts on poverty and extreme poverty. It is also concluded that there are high returns if targeting can be improved. 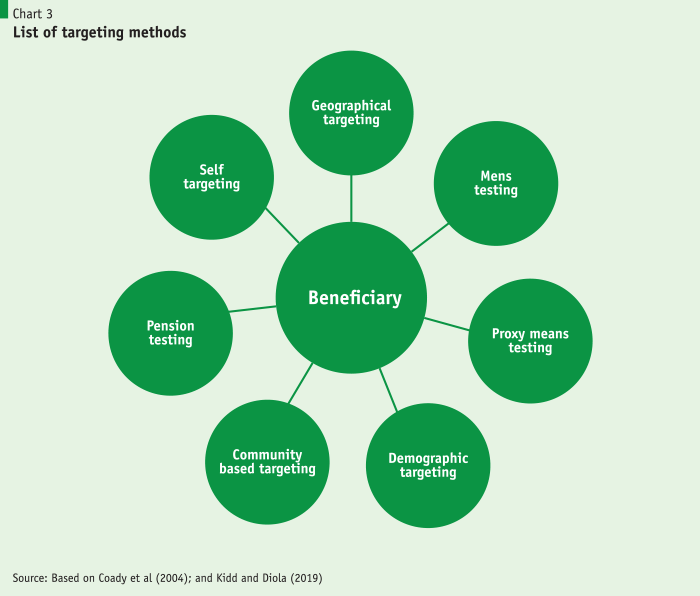 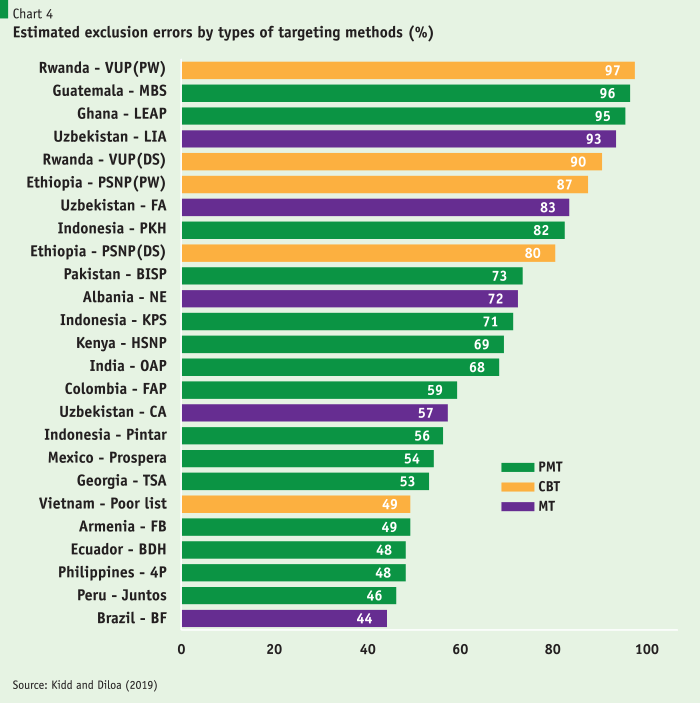 Targeting Methods: Targeting of deserving beneficiaries accurately has always been difficult. Given this difficulty, various targeting methods have been adopted in different countries and for different types of intervention programmes. Among them, one method – ‘Proxy Means Test (PMT)’ has gained popularity due to World Bank.

Since income (means test) are not easily measurable in low income countries, PMT has been promoted as an alternative for targeting poor. It tries to predict a household’s – rather than an individual’s – level of welfare using an algorithm that is commonly derived from statistical models. Proxies for income are usually determined through an analysis of national household survey datasets and are meant to be easily observable and measurable indicators that have some correlation with consumption or income. Usually, the proxies include: demographics; human capital; type of housing; durable goods; and productive assets. Surveys of all households (desired method) are conducted to generate data. Once the survey is undertaken, the data is fed into a computer and the algorithm is applied. Scores are allocated to households which are ranked from poorest to richest. A threshold is determined or are agreed upon for eligibility. All households those with PMT score below the threshold are considered to be eligible. But implementation of PMT model is expensive. In Pakistan, the 2009 PMT survey cost US$60 million. In Indonesia it costed US$100 million in 2015. In Tanzania, each PMT survey cost US$12 per household implying that for the entire nation, the total cost would be around US$140 million. Kenya’s HSNP programme required around US$10 million to survey only 380,000 households, or around US$26 per household. In Bangladesh has been costing about $ 80 million (Kidd et al, 2019).

Attaining the intended goals of the SS system (for instance reducing poverty of extreme or poverty among bottom 25 % of the population) through adopting one of the seven targeting approaches is not always satisfactory due to inherent identification problem of targeting methods. In a recent study, Kidd et al (2019) assess the targeting efficiency of three targeting methods such as PMT; community-based testing (CBT); and means testing (MT) of 25 selected social protection schemes of low- and middle-income countries. More specifically, they wanted to ‘assess whether is it possible to effectively reach those living in extreme poverty using poverty targeting. accordingly, they examined the targeting effectiveness of those programmes aiming to reach the poorest 25 % or less of their intended category.

On the basis of the findings, it is concluded that “overall, the results demonstrate a mass failure of poverty targeting across low- and middle-income countries. In programme after programme, the majority of both the intended recipients and the poorest members of society are excluded. Therefore, if the aim of governments and international agencies is to reach those living in poverty and ‘leave no-one behind,’ the use of poverty targeting will result in failure.”

Bangladesh PMT model uses HIES 2016 data. It is an updated version of the 2010 PMT model. From ten different PMT models, the best model has been selected. It is selected on the basis of key indicators such as under-coverage, leakages and targeting efficiency when a 20 % cut off point is considered.

Implementation of the National Household Database will help authority to create a single registry system with important information of potential beneficiaries of different types of public intervention programmes. This will also help establish a comprehensive MIS system for monitoring and evaluation.